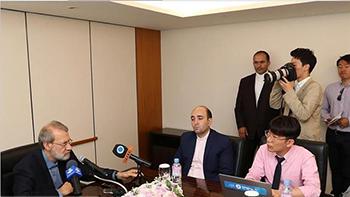 Iran’s Majlis (parliament) Speaker Ali Larijani has said the US president’s empty “rhetoric” against the 2015 nuclear agreement between Iran and six world powers, noting that the idea of scrapping the deal is not in Washington’s interest.

Speaking at a Thursday press conference in the South Korean capital city of Seoul, Larijani said, “The nuclear deal is an international agreement. Iran has agreed with the P5+1 (group of world powers) at the international level and [the deal] has been passed by the [UN] Security Council.”

During his presidential campaign, US President Donald Trump had promised to ditch the nuclear accord which he referred to as a “disaster” and “the worst deal ever negotiated.”

“The nuclear agreement incorporates a dispute resolution mechanism. If anybody has an objection, they should act accordingly. Scrapping the deal is not in the interest of the Americans and such a statement is mere rhetoric, which may be aimed at pushing their own economic rivals out of the field,” Larijani said.

Iran and the five permanent members of the United Nations Security Council – the United States, France, Britain, Russia and China – plus Germany signed the Joint Comprehensive Plan of Action (JCPOA) on Iran’s nuclear program in July 2015 and started implementing it in January 2016.

Under the JCPOA, Iran undertook to put limitations on its nuclear program in exchange for the removal of nuclear-related sanctions imposed against Tehran.

The former US administration officials have assured the Congress that the JCPOA would not affect the existing non-nuclear sanctions against Iran, but they strongly advised the US legislators against imposing any new non-nuclear sanction against Tehran, arguing that new bans may jeopardize the nuclear deal.

However, Washington has so far slapped two rounds of sanctions on Iran under the new US administration over the country’s missile work.

On June 15, the US Senate passed a sanctions bill by an overwhelming margin against Iran’s ballistic missile program and the country’s Islamic Revolution Guards Corps (IRGC) over allegations of support for terrorism.

The legislation needs the approval of the House of Representatives before being endorsed by President Trump.

Larijani questioned the effectiveness of such sanctions, adding, “What has been the result of imposing sanctions against IRGC officials? They (IRGC) do not have very much assets in Iran, let alone in the US so they go ahead with freezing IRGC officials’ assets.”

“The US must act according to international regulations. Gone are the days when one could dictate [policies] to other countries, because countries want to be independent,” he noted.

In response to a question about the existing disputes between Tehran and Riyadh, Larijani said, “We are not to blame for the deterioration in Iran-Saudi relations. In the recent era, the Saudis have not behaved properly.”

In recent months, Saudi officials have stepped up their hostile rhetoric against the Islamic Republic.

Last month, new Saudi Crown Prince Mohammed Bin Salman, who is also the defense minister, said his country would work to move “the battle” to Iran.

Saudi Foreign Minister Adel al-Jubeir also said on June 6 that Iran had to be “punished” for what he called interference in the region.

Mutual ties hit a record low in January 2016, when Riyadh executed prominent Saudi Shia cleric Sheikh Nimr al-Nimr. Saudi Arabia unilaterally severed its diplomatic ties with Iran after protests in front of its diplomatic premises in the cities of Tehran and Mashhad against Nimr’s execution.

Larijani further criticized Saudi Arabia for leading a boycott campaign against Qatar and noted that Iran has no role in the dispute.

“The severance of Saudi-Qatar ties has nothing to do with Iran. The Saudis imposed a blockade on Qatar and this is misbehavior in the region,” he pointed out.

The top lawmaker also slammed Saudi Arabia for attempting to force Qatar to cut ties with Iran as one of the 13 pre-conditions for the resumption of Doha-Riyadh relations and said, “Countries are independent and they make decisions based on their interests.”

Saudi Arabia, the United Arab Emirates (UAE), Bahrain, the Maldives, and Egypt recently broke off ties with Qatar, which they accused of destabilizing the region and supporting terrorism. They have also imposed an economic siege on the country.