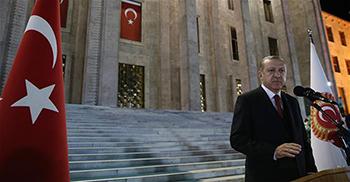 The Turkish parliament will hold a plenary session on July 15 to mark the first anniversary of the failed coup attempt, blamed on the Fethullahist Terror Organization (FETÖ) under U.S.-based Islamic preacher Fethullah Gülen.

President Recep Tayyip Erdoğan will attend the session during which Parliament Speaker İsmail Kahraman and representatives of political parties are expected to address deputies, the public and foreign mission representatives.

Erdoğan will also address thousands of people in front of the parliament late night on July 16 after he attends a ceremony on the July 15 Martyrs’ Bridge in Istanbul.

Fighter jets under the control of coup plotters bombed the parliament on July 16, 2016.

A number of structures and public spaces were renamed in the immediate aftermath of the coup bid, most notably Istanbul’s Bosphorus Bridge, which was retitled as the July 15 Martyrs’ Bridge.

On the night of the coup bid, tanks rolled out on the streets of Istanbul, including the bridge, in an attempt to block the crossings between the city’s Asian and European sides. A group within the army also went on air to announce they had seized control of the country.

At least 250 people were killed and nearly 2,193 injured in the coup attempt.

Thousands of army officers have been detained for suspected links to FETÖ as part of a nationwide investigation in the aftermath of the thwarted coup.

The probe has also seen hundreds of officers sacked from the military.

Turkey declared a state of emergency on July 20, 2016 in the aftermath of the attempted takeover.

During a state of emergency, the cabinet has the right to issue statutory decrees under the president of the republic without regard to routine procedures and restrictions in Article 91 of the constitution. These decrees are first published in the official gazette and then submitted to parliament for ratification.

Under a statutory decree, Turkey announced wide-ranging changes in its armed forces. As part of the changes, all military schools were closed and war colleges were replaced with a National Defense University.

The university will offer new institutions to train staff officers and give postgraduate education, including war academies and vocational schools that train non-commissioned officers.

Turkey being subjected to double standard by int’l media: Erdoğan