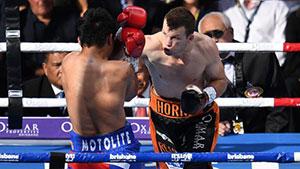 With a bloodied face, near-closed right eye and badly bruised cheekbone, 29-year-old Brisbane school teacher Jeff Horn became the WBO welterweight champion of the world when he defeated boxing icon Manny Pacquiao by a unanimous points decision on Sunday afternoon. Sorry, “defeated” doesn’t sound adequate enough. It was one of the biggest upsets in recent history.

“I hope that earns a little bit of respect for the kids,” Horn said. “I’ve climbed Pacquiao mountain.”

Straight after the fight, Horn held up a set of boxing gloves in one hand and a walking stick in the other and called out brash American Floyd Mayweather, who beat Pacquiao in Las Vegas two years ago and is preparing for an August megafight with UFC star Conor McGregor.

“Does he want the boxing gloves or the walking stick?” he asked.

The brash statement was at odds with the humility Horn has shown for months in the lead-up to this bout, which was staged before a crowd of more than 51,000 people at Suncorp Stadium.

Horn’s story is well told but you’ll be hearing more about it in coming days: the unassuming kid from Brisbane’s south who was bullied so badly as a teenager he walked into Glenn Rushton’s martial arts school to learn how to defend himself.

Just over a decade later, he is the champion of the world with a mandatory rematch against Pacquiao, possibly back in Brisbane in November. He is guaranteed a payday of at least $2 million from that fight.

Considered a long shot to even stay the distance against the  11-time world champion, and in the face of plenty of disrespectful verbals barbs from  Team Pacquiao in the lead-up, Horn came out strongly and bravely, rarely flinching despite eating his opponent’s fabled left hand on several occasions.

But it was the events of the ninth round that will become the stuff of legend.

“The ref said, ‘Show me something or I will stop the fight,”‘ Horn said. “My heart just kept me going. I was a bit blurry in that right eye but I came back.”

Instead of crumbling like many had expected, Horn stayed strong in the final three rounds.

“I respect the judges’ decision,” Pacquiao said.  “He was much tougher than I expected. Much, much tougher.”

A record pay-for-view audience of about 200,000 households in Australia watched the fight on Main Event, with more than 95million households watching on free-to-air in the US.