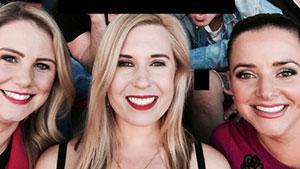 Three Brisbane women have been subjected to a vile, degrading and sexist tirade while trying to watch the Pacquiao-Horn fight at Suncorp Stadium.

In a tweet that has since been shared more than 200 times, Brisbane journalist Tegan George called out the behaviour.

“Never have I or my sports loving girl friends been so badly abused & sexually harassed. Went on for hours,” she tweeted, sharing a video of one alleged perpetrator.

In the video, a man sits with his legs widely spread, giving her the finger and says: “Come on b—-, f— off away from me, will ya?” with a dismissive hand wave.

She asked if that was how he spoke to all women and he replied: “No, only c—s like you.”

During the fight, remarks from the men sitting behind them ranged from questioning the gender of Philippine women, foul comments about the trio’s bodies and sexually explicit suggestions, and frequent use of the word “c—s” and other disgusting language, and they also spilt drinks on them.

The ugly language used was too offensive to republish.

Ms George’s friend Sally said as soon as the trio sat down, they began being heckled by the men sitting behind them.

“They were racist and vulgar,” she said.

“Every girl is used to a bit of a wolf-whistle, or a bit of a comment here or there.

“But what happened to us this afternoon is well beyond that.

“There is a difference between your “tits and arse” [comments] and what was delivered to us today.”

Sally said she often went to rugby union, rugby league and cricket events with her friends.

The trio are professional women who know how to take a joke and are not precious.

“We’re not prudes by any definition,” she said.

“It was really relentless and it was unprovoked. We were trying to watch the fight, it was a great fight.

“We tried to defuse the situation and make it OK … And it kept escalating, it wasn’t us talking to them, it was us ignoring them and them upping the vulgarity of the comments.

Sally said she finally turned around to say something and was abused, and then Ms George took the video.

“What was captured in the video was probably the tamest stuff that got delivered to us,” she said.

To make matters worse, the male crowd around them did nothing to stop the abuse, Sally said.

One man even allegedly told the women to calm down and enjoy the boxing.

“This is what was most shocking about the whole scenario – the fact that nobody said anything,” Sally said.

“No matter, how drunk you get, there’s no excuse for that kind of behaviour.

“And I couldn’t believe the bystander syndrome.

“Women should be able to go to a sporting event like this and be safe and not be subjected to this sort of behaviour.”

Sally went to find a police officer and a couple of the men – the perpetrators from a group of friends who laughed at the behaviour – were removed from the stadium.

“Unless we did something, nothing was going to happen,” she said.

Sally said women were often forced to put up with unacceptable behaviour such as cat-calling or sexually explicit remarks.

“At some point someone needs to draw a line and say that’s not socially acceptable behaviour,” Sally said.

Messages of support flooded Twitter following the post, with people roundly condemning the behaviour of the men and applauding the women for calling it out.