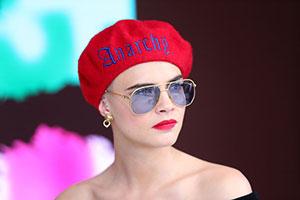 Cara Delevingne has been vocal about her past relationship with musician St. Vincent; now, the Valerian actress and supermodel is continuing to raise her voice about her sexual fluidity.

In an interview with fellow model and friend Adwoa Aboah for Glamour, Delevingne not only discussed her sexuality, but why she balks at labels when it comes to sexual preferences.

“Once I spoke about my sexual fluidity, people were like, ‘So you’re gay.’ And I’m like, ‘No, I’m not gay,'” she said. “A lot of the friends I have who are straight have such an old way of thinking. It’s ‘So you’re just gay, right?’ [They] don’t understand it. [If] I’m like, ‘Oh, I really like this guy,’ [they’re like], ‘But you’re gay.’ I’m like, ‘No, you’re so annoying!’…. Someone is in a relationship with a girl one minute, or a boy is in a relationship with a boy, I don’t want them to be pigeonholed.”

Delevingne also shared that she was happy with how the conversation has expanded around sexual fluidity, especially for young people who are exploring who they might be attracted to.

“I know 13- and 15-year-old girls who are like, ‘I don’t know if I like a boy or a girl yet. I haven’t decided,'” she said. “And it’s like—[imagine] if I was able to comprehend [that at their age]. I am very happy how sexuality has become easier and freer to talk about, especially for kids.”