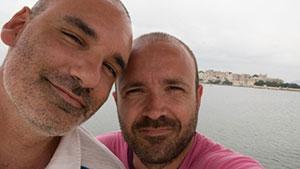 Staunchly Catholic Malta only introduced divorce in 2011, to the dismay of many in authority.

Six years later, it ranks top in Europe for gay rights, it was the first country to ban gay conversion therapy – and it’s about to legalise same-sex marriage.

“Malta wants to keep leading on LGBT issues and civil liberties, to serve as a model for the rest of the world,” Prime Minister Joseph Muscat told the BBC.

Fresh from a resounding electoral victory, Mr Muscat put forward the Marriage Equality Bill as the first law to be discussed in parliament.

Aware of the potential backlash, centre-right Nationalist Party leader Simon Busuttil killed off speculation that the conservative faction within his party was against gay marriage. He insisted the opposition would support the new law.

It is not a standalone law, but consists of changes to the Marriage Act and several other laws.

Marriage will be put on an equal footing for everyone, removing the notion that there is a “first-class” union for husband and wife and a “second-class” version for the rest, according to Mr Muscat.

But the law has also been dismissed by critics as too progressive and even of going beyond the mandate of the Labour government’s pledge.

Nationalist Party whip David Agius protested in parliament: “From now on, you cannot call your parents ‘mum’ or ‘dad’ because it is not in the law. Will we be celebrating “person who gave birth today” instead of Mothers Day?”

The suppression of the cherished terms ‘husband and wife’, ‘mother and father’ in Maltese law is lamentable

Malta Archbishop Charles Scicluna told a church community recently: “We are not against gays… But we do not need to change the way in which God created marriage to enable us to say that two men or two women can get married.”

The amended law undermines the true procreative purpose of sexual intercourse between a husband and a wife, Mgr Scicluna told the BBC.

“The suppression of the cherished terms ‘husband and wife’, ‘mother and father’ in Maltese law is lamentable.”

The Mediterranean island nation of fewer than 450,000 inhabitants has seen dramatic social changes since it joined the EU in 2004.

As Malta’s first children’s book about gay love is published, Prime Minister Muscat knows the tide is changing – and he is taking some of the credit.

“The change in civil liberties in Malta came because the Labour government put issues of equality as a matter of principle rather than mere cosmetic changes.”

When Maltese couple Neil Falzon and Roderick Vassallo got married in Portugal in July 2013 they could only host a small celebration, certainly nothing like the massive family feasts synonymous with Maltese weddings.

“At the same time it was surreal, almost other-worldly, that I was sitting before a marriage celebrant doing the unthinkable: marrying another man,” recalls Mr Falzon, a human rights lawyer.

He said that from the age of 10 he knew he had a “dark corner” inside, which he felt nobody should see.

“Throughout those difficult years the toughest moments were those battling with the certainty that I would live alone forever, with nobody to love and no family of my own.”

“Since my coming out I always excluded the possibility of being ever married. The Maltese mentality was quite medieval at the time and being openly gay was somehow frowned upon, let alone the formal sanctioning of a relationship.”

When Malta introduced civil unions in 2013, which gave several rights to gay couples but recognised only marriages contracted abroad, the two men felt they could finally become integrated into Maltese society.

“We had chosen to marry in Portugal on a point of principle. Why should we settle for a civil union when everyone else can marry? Although the legal effects are identical, the name is everything. This is why the new legislation is so important,” Mr Falzon says.