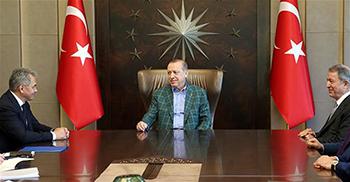 Cooperation between Turkey and Russia has tightened markedly since last year, with the two countries jointly sponsoring peace talks in the Kazakh capital Astana.

Turkish troops and YPG militants have repeatedly exchanged cross-border fire in recent days, with Ankara announcing its concerns over the YPG’s presence in Afrin, a spot close to the Turkish border.

The Sabah newspaper reported on July 2 that pro-Ankara Syrian rebels were on standby for an operation against the YPG and Russia could ensure security in the air.

Asked about the possibility of an operation around Afrin, presidential spokesman Ibrahim Kalin said on July 1 that Turkey “is taking all measures to protect our borders and national security.”

Last August, Turkey launched its Euphrates Shield cross-border operation aimed at clearing the border zone in northern Syria of both the YPG fighters and jihadists. The operation was wound up in March, before NATO-ally Turkey, Russia, and Iran agreed in a memorandum signed on May 4 to establish four separate de-escalation zones in Syria for at least six months.

Parties are working on a mechanism in which “mainly Russia and we in Idlib region, mainly Russia-Iran around Damascus, the U.S. and Jordan will take place in southern Deraa region,” Kalın said on June 21, elaborating on monitoring forces that will be deployed between the regime and opposition in four de-escalation zones.

Another pressing issue between Turkey and Russia is over a missile purchase, with Russian presidential aide Vladimir Kozhin saying on June 29 that the two sides have agreed on the delivery of the S-400 air defense system to Turkey.

“The contract has been agreed upon. The issue on the loan has not been resolved yet,” Kozhin was quoted as saying by the Russian news agency RIA Novosti.

Kozhin also said Russia saw “no obstacles” to the delivery of the air missile defense system to Turkey in connection with its membership to NATO.

The S-400 is Russia’s next-generation air defense system. It can carry three types of missiles capable of destroying targets including ballistic and cruise missiles.

It can track and engage up to 300 targets at the same time and has an altitude ceiling of 27 kilometers (17 miles).