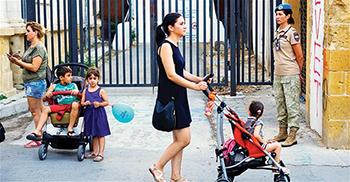 U.N. Secretary General Antonio Guterres held “highly constructive” talks on Cyprus with key parties, enabling a clear vision of what could lead to a settlement, the U.N. has said.

His spokesman said the series of talks, held in the Swiss alpine resort of Crans-Montana, was “highly constructive… a positive, results-oriented meeting.”

“A clear understanding emerged of the essential elements of a package that might lead to a comprehensive settlement in Cyprus,” the spokesman added.

The talks continued “at the political level” on July 1 and Guterres “remains fully engaged” in the effort, the spokesman’s statement said.

The negotiations have been billed as the best chance for resolving one of the world’s longest-running political crises.

Cyprus has been divided since 1974 when Turkish troops intervened its northern third in response to an Athens-inspired putsch seeking union with Greece.

Turkey maintains more than 35,000 troops there.

Several previous peace drives have stumbled, with Greek-Cypriots demanding a total withdrawal of what they say is an occupying force and Turkish-speakers fearful of ethnic violence in the event of a pullout.

A diplomatic source told AFP that Ankara was prepared to slash its troop numbers by as much as 80 percent, but Foreign Minister Mevlüt Çavuşoğlu went on national television June 29 to deny a withdrawal was planned. The talks began in an upbeat mood on June 28.

However, AFP quoted a source close to the discussions as saying that the atmosphere hardened on a number of issues – particularly the Turkish-Cypriot demand for an alternating presidency in any future united state.

Çavuşoğlu also told reporters the Crans-Montana talks would be the “final conference” on the Cyprus problem, adding: “We need to reach a settlement.”