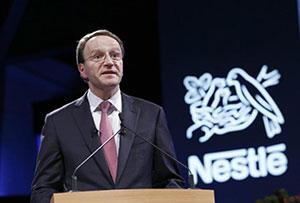 Nestle’s (NESN.S) plan to shore up its capital structure, announced only days after being thrust into the spotlight by activist shareholder Third Point, was received by investors as a precursor to bigger changes under the company’s new leadership.

Shares in the world’s largest foodmaker rose as much as 2 percent on Wednesday, close to the record high touched on Monday after the New York-based hedge fund disclosed a $3.5 billion stake and urged Nestle to buy back shares, set a target for margin growth and shed non-core assets including its stake in L’Oreal (OREP.PA).

Investors did not have to wait long for a response, with Nestle announcing late on Tuesday that it would launch a 20 billion Swiss franc ($20.8 billion) share buyback program while leaving room for near-term acquisitions.

Nestle also said it would continue adjusting its portfolio and assess opportunities to boost profit margins, stopping short of setting a firm target. It added that the measures were the result of a review instigated at the start of the year after Mark Schneider took over as chief executive.

The moves were welcomed by stakeholders large and small.

“This is a new era for Nestle and I’m extremely positive on the prospects for internal and external growth,” said Carine Menache, who runs a Monaco investment firm that owns Nestle shares. She and UBS analysts said the buyback should lift earnings by 6 percent, while increased merger and acquisition (M&A) activity could provide a further boost.

“Nestle may have a poor track record for M&A, but the new CEO, Schneider, is now in charge and he has a great track record,” she added.

Reaching a 19 percent operating margin, the midpoint of Third Point’s recommendation, would lift earnings by another 8 percent, according to UBS, which said Nestle shares now offered the greatest opportunity for growth of all the European packaged goods companies it covers, bolstering its “buy” rating.

Of Nestle’s plan, which they described as “responsive but not reactionary” to Third Point, UBS said: “We think this sends a strong message to the markets – expect more to come.”

Many of the demands laid out in Third Point’s letter echo the steps Unilever took in the wake of the Kraft bid.

Investors said the biggest omission from Nestle’s response was any reference to its 25 billion euro ($28.4 billion) stake in L’Oreal, which dates back to 1974, when the French heiress Liliane Bettencourt sold a large part of her holding to Nestle.

That omission and lack of a margin target means the announcement may not completely satisfy Third Point, which is controlled by billionaire investor Daniel Loeb. Third Point has declined to comment on the announcement at this stage and Nestle is expected to say more at its investor day in September.

“It’s only a start,” said Mirabaud Asset Management’s Nicolas Burki. “It will not be enough.”

Nestle has long touted the L’Oreal stake as value-creating, and a source familiar with the company’s thinking said there was no change to that view.

The big question, however is what Nestle would do with the cash, besides buybacks, if it sold down the L’Oreal stake.

The company did say its capital spending would be focused on higher-growth categories of coffee, pet food, baby food and water. It added consumer health to the list of priorities, potentially making it a competitor to the likes of Johnson & Johnson (JNJ.N) and GlaxoSmithKline (GSK.L).

However, EFG Asset Management’s Urs Beck cashed out of his Nestle position on Monday’s price spike and is skeptical that it can find acquisitions big enough to move the needle for a company with $93 billion in sales.

“The ship is just too big to be steered into different waters through portfolio management,” he said.

VICTORY ON BOTH SIDES

Nestle is Europe’s most valuable company, with a market value of $263 billion last week, before Loeb’s position was made public, adding $10 billion in one day.

The positive reaction most likely reflects the bullishness of long-term investors rather than event-driven hedge funds looking for quick turnarounds, says Michael Wegener at Case Equity Partners in Hong Kong.

Wegener said he doubts that many arbitrageurs have moved into Nestle’s stock yet, since the Loeb stake remains too soft a catalyst at this stage.

But one London-based manager of an event-driven hedge fund with no involvement with Nestle described the situation as a victory for both sides.

“I suspect (Third Point’s) presence actually helps Schneider with his change agenda,” said the manager, who asked not to be named. “I suspect the buyback is not enough, but Third Point is unlikely to feel the need to get shouty.”

Swiss activist shareholder Rudolf Bohli said that Loeb, known for campaigns against Yahoo, Sony Corp and the Dow-DuPont merger, is on the right track.

“Loeb has set the right tone and his agenda is correct,” said Bohli, who recently exited GAM Holding with a profit after failing to replace the financial company’s chief executive.