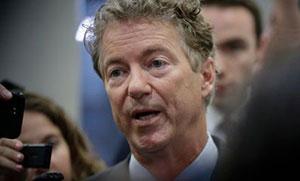 Washington Republicans are taking no July 4 holiday on the Senate’s ObamaCare overhaul bill — with President Trump calling senators and Kentucky GOP Sen. Rand Paul pushing a conservative alternative to the existing measure that he says is “lit up like a Christmas tree” with spending.

“I don’t think we’re getting anywhere with the bill we have,” Paul said on “Fox News Sunday.” “Every time you add more federal money, more spending for the big-government Republicans, it offends the conservatives. … Senate leadership is loading (up) the bill like a Christmas tree, with billion dollar ornaments.”

Senate Majority Leader Mitch McConnell, R-Ky., didn’t have enough support last week to vote on the measure, leaving it behind as Congress departed for the July recess.

The Kentucky Republican will need support from at least 50 of the chamber’s 52 GOP senators to pass the bill.

Paul is pushing a plan to divide the Senate bill into two parts — a vote on repealing ObamaCare and a separate vote on replacing it.

Forty-nine GOP senators voted in 2015 in favor of repealing the 2010 health care law, formally known as the Affordable Care Act. However, they knew that then-President Barack Obama would veto the effort.

President Trump over the past few days has expressed his support for a separate repeal-and-replace plan, in an effort to fulfill Republicans’ long-standing promise to end ObamaCare, struggling under increasing premium costs and fewer policy options for Americans.

However, McConnell said Friday that he wants to stick with the existing bill.

Paul said Sunday that he would support the repeal effort but seemed unlikley to back the replace effort in its existing form, which he said includes roughly $200 billion in insurance “bailouts.”

He also said Trump is talking to GOP senators over the weekend and expressed confidence about the bill being passed this summer so the president and Congress can move to tax reform by the fall.