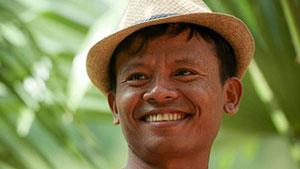 Under the military junta that ruled Myanmar for nearly 50 years, the media were tightly controlled.

But after a quasi-civilian government took over in 2011, many curbs were lifted and a rigid censorship regime abolished.

Journalists were among masses of political prisoners released, and media outlets mushroomed to serve a highly literate population that had been starved of independent news.

When the party of Aung San Suu Kyi, a Nobel Laureate kept under house arrest for years because of her democratic activism, won historic elections in 2015, many expected more media freedom would follow.

But journalists and press freedom advocates are alarmed by what they say is an increasingly heavy-handed approach, especially on matters of sensitivity to the military, which retains significant power.

Aye Nai, 53, and Pyae Phone Naing, 24, report for the Democratic Voice of Burma broadcaster, while Lawi Weng, 38, works for The Irrawaddy news magazine and website. Both outlets were run by exiles who fled during the junta era to report on abuses in the then pariah state, and who returned home after reforms in 2012.

The trio were handed to police and charged under the colonial-era Unlawful Associations Act for having alleged contact with the TNLA, which the army has recently been clashing with and describes as a “terrorist” group. They could face up to three years in prison, and a close aide of Ms Suu Kyi has defended the charges.

“It’s true that they broke the law by going to meet ethnic groups,” Win Htein, a former political prisoner, said.

Yet the case has caused uproar because many journalists have met TNLA rebels without facing prosecution, and the group came into direct contact with reporters and officials when it attended peace talks in May in the capital, Naypyitaw.

Lawi Weng is well-respected for his reporting on ethnic armed groups around Myanmar.

His fiancée, Loa Htaw, told Reuters news agency that he was well aware that he could be jailed for reporting on such issues, and criticising both the military and government.

But “he needs to report for the voiceless and the powerless”, she said.

Aung Zaw, editor of The Irrawaddy, said his reporter had been planning to investigate reports of abuses by the army and local militias in the area.

He said he had been unlawfully arrested, and that journalists were legally allowed to gather news in conflict zones. “Our work is under threat,” he told the BBC.

In an opinion piece, he wrote: “The return of a climate of fear is very disturbing, particularly after the National League for Democracy won a landslide victory in the 2015 election.

“I can’t help but recall Lawi’s optimism on Election Day. No, he was not thinking that he would eventually be locked up under this government”.

The arrests come weeks after two journalists from The Voice newspaper were sued by the military over a satirical article.

Editor Kyaw Min Swe remains in custody and has been charged with defamation under a controversial section of the telecommunications law that human rights groups say is being used to silence criticism of the military and government online.

Activists say at least 71 people have been charged under Section 66(d) since the law came into force in 2013 – the vast majority after Aung San Suu Kyi’s NLD took power.

One man was sentenced to six months for posting a poem on Facebook about having a tattoo of former President Thein Sein on his penis.

Aung San Suu Kyi has come under sustained criticism internationally for what many perceive as her failure to speak out about grave human rights abuses allegedly committed by the military against the Muslim minority Rohingya community, and civilians from other ethnic minorities in conflict-affected areas.

The treatment of journalists under her government has also come under scrutiny.

Some Myanmar watchers say that not all the criticism is warranted, however. The military retains significant power throughout the country, and controls the defence, home and border affairs ministries and holds 25% of the seats in Parliament.

As a tenuous democratic transition continues, Ms Suu Kyi’s room to manoeuvre is tight and she is choosing her priorities carefully, some argue.

In April, she told the BBC that she was “just a politician” and “no Mother Theresa”.

Still, with a parliamentary majority the NLD government “has the power to amend or abolish many repressive laws” that are used to target journalists, the Democratic Voice of Burma’s editor-in-chief Aye Chan Naing told the BBC.

He adds that the arrest of two of his journalists for doing their “normal job” is “shocking “.

“It’s very disappointing the way the government [has reacted] on this case,” he says.

“We can understand the way the military is acting but it’s really shocking to see [the government], instead of helping and siding with the independent journalists, is kind of giving the green light to the military to go ahead.”

But Win Htein, the aide to Ms Suu Kyi, has said that getting a peace deal is a bigger priority than amending the Unlawful Associations Act.

But he does admit that the recent series of cases has sparked fresh debate among reporters about how far they can go in criticising the military.

He says journalists approached Aung San Suu Kyi on 28 June to ask about press freedom in the wake of the arrests, “but she never listens about that”.