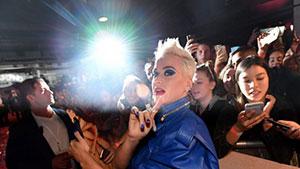 Perry was spotted leaving the country via Sydney Airport on Sunday night about the same time her “live” performance on Channel Nine’s The Voice went to air.

This, understandably, left Sunrise viewers scratching their heads when they threw off the doona covers on Monday morning to see Perry gracing their television screens once again. The pop star was co-hosting the breakfast show alongside David Koch, throwing to Monday’s news headlines and even draping herself in a python for the cameras.

However, a Sunrise spokeswoman has since clarified that the program had never promised that Perry’s segments would be live. The breakfast team pre-recorded Perry’s segments on Saturday, and plugged the gaps live on Monday morning.

“Katy Perry has recorded her portions of the show,” the spokeswoman said.

“We let fans know that last week, by inviting them to come down and see her during her appearance.”

To Sunrise’s credit, it did give “Katycats” a heads-up that the singer would be in the studio Saturday.

Don’t forget that YOU can see superstar @katyperry when she appears at our Sydney studios from 10am TOMORROW! Come armed with your best Qs ? pic.twitter.com/kToqaAz5Wq

But that hasn’t stopped numerous people from taking to social media to slam the mash-up between live and pre-recorded segments as “cringeworthy”.

Despite Kochie claiming Perry had been part of the Sunrise family “for years”, the megastar had no idea who Armytage was when she walked into the studio.

Others, though, gushed over Perry’s close encounter with a komodo dragon and the fact she dug into a meat pie while on camera.

“The production complexities of performances like Katy’s means sets can’t always be struck and reset during the time allowed by a commercial break,” he said.