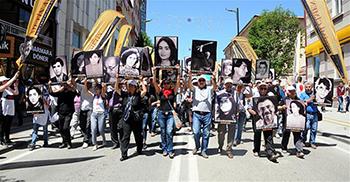 The Sivas Massacre, an arson attack staged by radical Islamists on mostly Alevi intellectuals inside the Madımak Hotel that killed 33 intellectuals and two hotel personnel, was commemorated on its 24th anniversary on July 2 in the Central Anatolian province of Sivas.

Families of the victims and representatives of Alevi institutions were joined at the commemoration ceremony by lawmakers from the main opposition Republican People’s Party (CHP) and the Peoples’ Democratic Party (HDP).

“It is disgraceful to differentiate people based on religious or ethnic identities on behalf of humanity. May God rest in peace those whom we lost in the Sivas massacre,” wrote the CHP chairman Kemal Kılıçdaroğlu on his Twitter account on July 2.

“Malicious powers have initiated such provocations in the past, do so today, and will do so in the future,” Gül noted.

“We desire that such events do not repeat themselves again but Sivas should wipe away this shame. It should do so with Sivas residents. Pain can be addressed through sharing and we should share this pain with all Sivas residents. … We should come together so this pain will diminish,” said Cem Association head Erdoğan Döner, who also spoke during the commemoration event.

Widespread security measures were taken in the province before and during the commemoration with the attendance of 3,000 police officers. Police stopped and searched vehicles carrying people from outside the province and checked the identities of people entering the city.

The attack against the hotel on July 2, 1993 targeted a group of artists and scholars participating in a conference organized by the Pir Sultan Abdal Culture Foundation (PSAKD), an Alevi organization. The event came at a time when the legendary short story writer Aziz Nesin, who was among the guests, had become a public target for translating Salman Rushdie’s “The Satanic Verses” into Turkish. The participants of the conference were accused of being infidels by the large crowd outside, who had been provoked to action by a number of local political leaders.

While 33 people attending the conference died in the fire, two hotel personnel also died along with them. Two protestors – who were in the crowd outside the hotel that instigated the events leading to the fire and who watched the hotel while people inside were burning to death and calling for help – also died in the fire.

The building, which became a symbol of discrimination faced by Turkey’s Alevi population, was expropriated in 2010 and turned into a science museum. The families of many of those who died in 1993 have demanded it be turned into a “museum of shame.”

Among those killed in the Madımak Hotel arson attack were poets Metin Altıok, Behçet Aysan and Uğur Kaynar, writer Asım Bezirci and Dutch anthropologist Carina Cuanna, as well as popular Alevi musicians Muhlis Akarsu and Nesimi Çimen. Nesin, the renowned writer and humorist, was rescued by firefighters – but nevertheless was beaten by his saviors as they escaped the burning building.