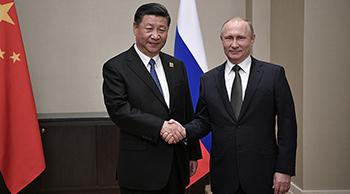 China’s leader is coming to Moscow for what the Russian president described as “a major event in bilateral relations.” It will be the two leaders’ third meeting this year, and deals worth $10 billion are expected to be signed this time.

Chinese President Xi Jinping will arrive in Russia on Monday, making a two-day stop on his way to Germany, where a G20 summit is set to take place later this week. A tête-à-tête with Russian President Vladimir Putin is said to be a central part of Xi’s trip to Moscow.

Ahead of his visit, the Chinese leader gave an interview to Russia’s TASS news agency, in which he particularly focused on the issue of deployment of the US THAAD missile defense systems to South Korea.

Xi criticized the move as “disrupting the strategic balance in the region” and threatening the security interests of all countries in the region, including Russia and China. He also reiterated that Beijing is urging Washington and Seoul to back away from the decision to deploy THAAD systems to the Korean peninsula.

Less than a month ago, Putin and Xi met in Kazakhstan’s capital, Astana, on the sidelines of a Shanghai Cooperation Organization summit. At that time, Putin called the upcoming meeting in Moscow “a major event in bilateral relations,” noting that it would have a “significant” impact on bilateral ties.

“By tradition, we use every opportunity to meet and to discuss bilateral relations and the international agenda,” the Russian president said.

The Chinese leader noted that “every new meeting brings new opportunities for an exchange of opinions,” adding that “the numerous meetings at various venues indicate the high level of bilateral relations” between Moscow and Beijing.

Before the Astana meeting on June 8, Xi had hosted Putin in Beijing during the high-level ‘One Belt, One Road’ forum, which brought together dozens of heads of state in May to discuss international cooperation.

During Xi’s visit to Moscow, scheduled for July 3-4, Russia and China will sign several contracts worth a total of $10 billion, as well as more than a dozen intergovernmental agreements on cooperation in various fields, TASS reported, citing Chinese Assistant Foreign Minister Li Huilai.

Andrey Denisov, Russia’s ambassador to China, told TASS the leaders will sign numerous corporate agreements between Russian and Chinese companies. “We’re discussing a number of draft documents, both on government and corporate levels. And we have dozens of documents relating to the former group,” he said.

“When good intentions framed in lofty words lead to chaos, the collapse of states and, in the long run, to bloodshed and numerous human casualties, the role of stabilizers, of the factors that may have a cooling, stabilizing effect on the generally turbulent international situation is very important. And Russian-Chinese relations are, to my mind, such a stabilizing factor,” Denisov said.

Chinese envoy to Moscow Li Hui said, “the comprehensive strategic partnership of coordination between China and Russia has been developing stably, sustainably, and at a high level.”

Moscow and Beijing have strengthened their strategic partnership on the international stage, Li noted, adding that they have been jointly pushing for political solutions to the Korean nuclear issue and the Syrian crisis.