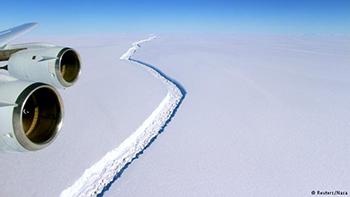 A massive piece of an ice shelf in West Antarctica is poised to break off any day now. A possible collapse of the Larsen C ice shelf has scientists worried. Why? Expert John Abraham explains – and speaks out about Trump.

If climate change continues unabated, ice-free areas on Antarctica will increase up to a quarter by 2100 – so says a recent study on changes in the planet’s southernmost continent.

Larsen C is a major ice shelf located on the Antarctic Peninsula, extending out over the ocean – a large fracture across the ice sheet is poised release an iceberg the size of the state of the US state of Delaware (a quarter the size of Wales, or twice the size of Luxembourg).

Consequences could be dramatic – as Antarctica melts, scientists fear it will soon desintegrate.

Adding to this, Trump’s withdrawal from the Paris Agreement and cuts for scientific research in the US might hinder future research around changes.

DW speaks with professor of thermal sciences John Abraham to find out what is the importance of Larsen C and how the scientific community is coping with Trump’s moves.

DW: What are the consequences of this huge portion of ice breaking off into the ocean?

John Abraham: Frankly, the consequences could be dire – but we don’t know exactly. These ice shelves stabilize the ice sheets – but when they break off, they can create an unstable situation. What scientists really want to know is what will happen after this portion of the ice shelf breaks off.
Infographic Larsen C Ice Shelf – breakaway of one of the largest icebergs ever recorded

When is it expected to break off and how will we know?

Scientists know it’s going to because we’re watching it in real time. A large crack – sometimes called a “rift” – has formed, and we can watch it progress day by day, week by week. The rift has nearly cracked the portion of the ice shelf through.

It’s not the first time this has happened there. The Larsen A and Larsen B ice shelves have seen breakoffs, too.

That’s exactly right. The Larsen B famously collapsed in just a matter of a few weeks after a portion of its ice shelf broke off into the ocean. Much of the upstream ice then subsequently collapsed. So we’re hoping that that doesn’t happen with Larsen C, which is much bigger. But we’re fearful it may.

Since when have these ice shelves been breaking?

Larsen A, one of the smaller ice shelves, disintegrated in 1995. It was followed by the Larsen B, which dramatically disintegrated in 2002 over a matter of a few weeks. And now we have Larsen C, which is disintegrating over 2016 and 2017.

In terms of the lifetime of these shelves, this is a pretty rapid succession of collapses.
Larsen ice shelf in Antarctic (picture alliance/ZUMAPRESS.com/NASA)

Larsen ice shelves in Antarctica have been disintegrating for two decades

Are these natural occurrences, or as a result of human activity?

That’s a subjective debate – but many scientists think that it’s because of human warming of the planet. As humans put out more greenhouse gases that trap heat, this results in both the air and the ocean waters warming. So these ice shelves experience heating from both above and below – and we know that impacts the health of the ice shelf.

The question is, would this have collapsed naturally? Or was human warming the straw that broke the camel’s back, so to speak? And many scientists believe that this is a sign of what’s to come. And that’s what got us really concerned.

And so, what are the consequences of all that ice going into the ocean?

Scientists know the ocean levels are rising at a few millimeters per year, right now. But we are seeing that sea level rise is accelerating – it’s rising faster and faster. If you ask oceanographers what the oceans will be like by 2100, the general view is that it’s going to be 1 meter [3 feet and 3 inches] higher than it is today.
View of the rift in the Larsen C ice shelf(NASA/John Sonntag)

The NASA has provided powerful images of the rift

This is going to result in displacement of people all around the world. In the United States, Miami is our poster child for sea level threat. Miami will be flooded. Miami will be lost, and there’s basically nothing that can be done to save it. If you think about the economic costs and social consequences of having to relocate entire cities or portions of countries, it’s astonishing.

And yet President Donald Trump has pulled the United States out of the Paris Accord. What chances do you think we have of changing the current trajectory that we’re on in terms of climate change?

The night of the US election, scientists in the US knew that President Trump would pull out of the Paris accord. We finally heard the official news [at the beginning of June] – and for many of us, this brought a sense of relief, strangely enough.

We were very afraid the United States would stay in the Paris accord, but sabotage it from the inside. Now with the US out, this gives other countries a chance to lead. And we know that now the economics are driving clean renewable energy deployment around the world, and that countries like China are taking major steps to become global leaders.
Protest against US pull out from Paris agreement (Picture alliance/AP Images/S. Walsh)

Trump withdrew from the Paris climate accord in June 2017, despite major opposition

And with the US pulling out of the Paris accord, what will be the legacy for climate science?

The Trump administration wants to dramatically cut our expenditures into climate research. That is: Remove the eyes and ears of scientists so we won’t know what’s happening in places like the Larsen C ice shelf. And that would really be devastating for our understanding of climate change.

But this is, again, an opportunity for other countries to become the science leaders, to step forward and replace some of the funding that the US is going to cut.

If we cut funding in the US but don’t replace it with other countries stepping forward, it will be an unmitigated disaster in our understanding of the Earth’s climate.

John Abraham is a professor of thermal sciences at the University of St. Thomas in St. Paul, Minnesota, in the United States.

The interview was conducted was Charlotta Lomas.

Penguins – a favorite animal for many because of their clumsy, waddling gait – offer researchers a useful way to measure the health of their habitat. Christian Reiss, an Antarctic fisheries biologist at the US-based National Oceanic and Atmospheric Administration, said: “Penguins are great ambassadors for understanding the need to conserve Southern Ocean resources.”