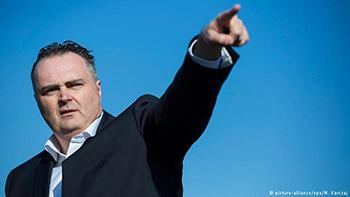 Austria’s Defense Minister has told local media that Vienna could impose controls and deploy troops on its border with Italy. It comes as the UN warns that the influx of migrants into Europe shows little sign of slowing.
Austria’s defense minister, Peter Doskozil, said on Monday that Vienna would be ready to quickly impose controls on its border with Italy, if the influx of migrants crossing the Mediterranean into Europe does not abate.

Speaking to the online edition of Austria’s daily “Krone,” Doskozil said he expected “that very soon border controls will be activated and that an assistance deployment (by the military) will be requested.”
The move, he added, “was indefensible if the inflow into Italy does not ease.”
Doskozil’s remarks came after the United Nations published a study on Monday revealing that so far this year more than 85,000 migrants had reached Italy after crossing the Mediterranean – a 20 percent increase compared to same period last year. That influx was only likely to increase, according to the UN.
“This is not sustainable,” the UNHCR’S special envoy for the central Mediterranean, Vincent Cochetel, said. “We need to have other countries joining Italy and sharing that responsibility.”
Migration likely to be key election issue
Doskozil’s center-left Social Democratic Party also appears to be toughening its stance on migration ahead of Austria’s early elections in August.
Parties have scattered over Austria’s rising anti-immigration sentiment, while the country’s far-right Austrian Freedom Party is projected to poll well in August and potentially even emerge as the most popular party.
Austria found itself at the center of Europe’s migrant crisis in 2015, namely because it was the first western European country migrants travelling from the Middle East along the Balkan route arrived in. It subsequently imposed controls on its borders with its eastern neighbors, Slovenia and Hungary, as well as along the Brenner Pass with Italy in the southern Tyrol region.
dm/bw (AFP, Krone)