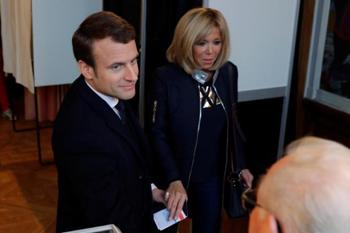 Helene Fouquet and Mark Deen
Paris: A 23-year-old man describing himself as a “nationalist” has been placed under investigation over a plan to attack French President Emmanuel Macron at this year’s July 14 Bastille Day parade, a police source says.

The man was arrested after expressing an interest, in a video game chatroom, in acquiring a Kalashnikov-style weapon in order to commit an attack, the source said, confirming a report on French radio station RMC.
During his detention, the suspect described himself as a nationalist and made offensive comments about blacks, Arabs, Jews and homosexuals, the source said.
RMC radio said the suspect was unemployed, had mental health problems and was sentenced in 2016 for making comments in favour of terrorism.
Security at this year’s Bastille Day parade on the Champs Elysees is likely to be even tighter than usual given the expected presence of US President Donald Trump.
In 2002, Maxime Brunerie, a neo-Nazi, fired a sports rifle at then President Jacques Chirac at the Bastille Day parade, before then being overpowered. Chirac was not harmed.
The arrest comes as Macron sought to place France at the centre of a new age of enlightenment in a major speech on Monday, calling on parliamentarians to put aside their post-modern cynicism to revive the nation’s creativity and offer leadership on the global stage.
“Returning French intelligence to its proper place is to make our country the new centre of the humanist project in the world,” Macron said in a 90-minute speech in the Palace of Versailles.
“What we have to achieve is a veritable revolution. We’re here, you and I, to change the order of things, to reignite French confidence.”
Speaking to the 925 members of the combined upper and lower houses in a special joint session of parliament, the youngest French leader since Napoleon said it was time for his country to take back the initiative at home and abroad to avert a slide toward fanaticism. Less than two months ago he defeated the anti-immigrant candidate Marine Le Pen in the presidential election and now he is betting that an appeal to France’s intellectual heritage will serve as a counterweight to the lure of Islamic fundamentalism, xenophobia or populism.
“Macron is the first head of state in a while to have a vision of the place of France in the world and in history,” said Thomas Guenole, a professor at the Sciences Po institute in Paris. “He belongs to the Enlightenment tradition.”
The lofty sentiments also have a more pragmatic subtext, Guenole argued. The 39-year-old president is taking every occasion to emphasise the gravitas of his role to distract from the weakness of his support – he won only 24 per cent of the electorate in the first round of the election.
“Macron is seeking to play up his presidential function to camouflage the essential fragility of his mandate,” Guenole said.
The job of delivering on that sweeping vision falls to Prime Minister Edouard Philippe, who is due to give a more practical speech to the National Assembly on Tuesday.
At the top of the to-do list laid out in detail during France’s long election campaign is a reform of labour-market rules to make the economy more responsive to shocks and competition from the rest of the world. The President has also promised changes to the tax system to help foment a more entrepreneurial culture while his plans to stabilise the public finances are already facing headwinds.
Beyond that, there is the challenge of keeping France safe from the evolving threat of Islamist terrorism and the unresolved issue of how to integrate immigrant communities living on the edge of French society into a more inclusive national identity. And he has to do that while keeping working class whites onside.
The French leader studied Machiavelli and Hegel in university, later working as the assistant to philosopher Paul Ricoeur, and has peppered his speeches with references to the Enlightenment, or the Age of Reason, the movement that put intellectual and philosophical progress at the heart of European political thought in the 18th century.
“France has always been the country of Enlightenment, not darkness,” he told Le Pen in a May 3 television debate, as she railed against immigration and demanded border controls to protect France from the outside world.
In his May 14 inauguration speech, Macron laid the foundation of his vision, telling French voters they had made the choice of an “extraordinary renaissance” by refusing to “turn their backs on enlightenment.”
Even as he seeks to inspire his countrymen, Macron is also looking beyond France’s borders to the challenges and opportunities facing Europe. He sought to turn the page on years of financial fire-fighting and technocratic squabbles to revive the spirit of ambition in the European Union.
“It’s up to a new generation of leaders to return to the original idea of Europe, which was essentially political: a voluntary association of realistic and ambitious states,” he said. “The past decade has been a cruel one for Europe. We have managed the crisis but we have lost the plot.”
Washington Post, Reuters