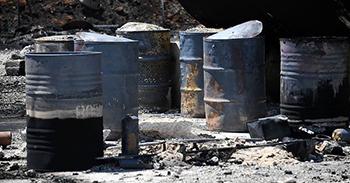 Western media are putting on a ‘chemical show’ fueled by carefully crafted messages that pin the blame on Damascus for the alleged use of chemical weapons, Russia’s Foreign Ministry spokeswoman has said in response to the rebels’ latest claims of toxic gas attacks by Syria’s government.
On Saturday, the Failaq Al-Rahman group, an Islamist Syrian rebel cell affiliated with the Free Syrian Army (FSA) accused Damascus of discharging chlorine gas in two neighborhoods of the Eastern Ghouta region, where the rebels are engaging Syrian government forces.

The statement produced on behalf of the FSA is nothing more than a “testament” of the official disinformation campaign which has already been launched against the government of Syria, Maria Zakharova said in her Facebook post Monday night.
While the rebel group claimed that more than 30 people suffered suffocation, the Syrian military immediately denied the accusations, calling them “false and baseless.”
“The General Command refuted these claims part and parcel, affirming that it never used chemical weapons before and will never use them as it doesn’t even possess them,” Sana reported.
“The chemical show is gaining momentum. The report on ‘Toxic gas attacks in Eastern Ghouta’ is another testament that the media campaign against Damascus has been launched,” Zakharova wrote.
Incorporating an English copy of the FSA press release on the chemical attack, the vigilant spokeswoman pointed out the meticulously crafted wording of the document.
“I want to emphasize the impeccable English language[in the release], which could be seen in such international documents as the UN Security Council’s resolutions and others,” Zakharova wrote.
The Russian foreign ministry spokeswoman emphasized that the language in the document follows “all canons of the Western press-services,” and was apparently drafted intentionally with a purpose of fueling the anti-Assad campaign.
“This is not conversational English… It is the language used in international legal communications. These are the phrases that will then be offered by our Western colleagues… for example, in a draft Security Council statement condemning ‘chemical attacks by the regime against civilians,’” Zakharova said.
Calling the rebels’ press release “only a prelude,” Zakharova warned of further provocations and a continuation of a disinformation campaign.
Over the weekend, Zakharova warned that “many fakes” may soon hit news outlets alleging chemical weapons use by Damascus. In her post Sunday, Zakharova questioned the validity of videos of the chlorine gas attack.
Moscow’s warnings of chemical attack news fabrications follows the White House announcement last week which claimed that “potential preparations” for another chemical weapons attack by the Assad government were underway.
“If Mr. Assad conducts another mass murder attack using chemical weapons, he and his military will pay a heavy price,” the White House said.
On April 7, Washington launched 59 Tomahawk missiles, at Syria’s Shayrat Airbase near the city of Homs. The strike was in response to what the US claimed was a Syrian government orchestrated chemical weapons attack on Khan Shaykhun – a charge Damascus has firmly and repeatedly denied.
In addition to Washington, the newly elected French President, Emanuel Macron, said France too could unilaterally strike Syria if chemical weapons are used there.
“If it is proven that chemical weapons are used on the ground and we can trace their provenance,” France may conduct unilateral strikes “to destroy the stocks of identified chemical weapons,” Macron said last month.
On Monday, Syrian deputy foreign minister Fayssal Mikdad told reporters that Washington should think twice before launching another strike.
“We will not be surprised if the US would commit new attacks on Syria, but the US must accurately account the reactions of Syria and its allies,” the official said, according to Sana.
“I affirm in the name of the Syrian Arab Republic that Syria disposed of its chemical program completely. There are no longer any chemical weapons in Syria, or any toxic chemical materials or gases that could be used in military operations,” said Mikdad.