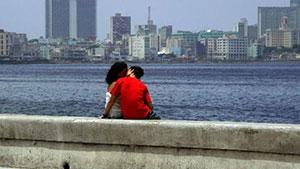 The authorities in the Cuban capital, Havana, say they are restoring a network of hotels where rooms are rented by the hour to lovers.

State-run “posadas”, or love motels, disappeared during Cuba’s economic crisis in the 1990s when they became hurricane shelters.
Private householders filled the gap in the market, but at exorbitant prices.
Officials say the posadas will be cheaper and will help end the practice of love-making in Havana’s open spaces.
Private renters usually provide air-conditioning, a fridge and a comfortable bed and cost about $5 for three hours.
But that is around a sixth of the average monthly Cuban salary (£22.90; $29.60) and unaffordable for most people.
State housing officials at the Provincial Housing Company of Havana say the new network of five posadas will be highly lucrative and will help people struggling with Havana’s overcrowded and scarce housing.
Many families often share the same apartment in Havana and divorced couples often have nowhere to go and are often forced to remain together because of the housing shortage.
The officials said they hoped the new chain would provide cheaper options for love-making in the city.
Couples making love are a common sight in Havana’s parks, on the beach and on the famed Malaccan seafront.
A commentator in the Trabajadores newspapers recalled that the first posada opened at the end of the 19th Century in central Havana and that most Cubans had vivid memories of them,
“Of memorable kisses and of the porter calling to the lovers when their time had finished”.