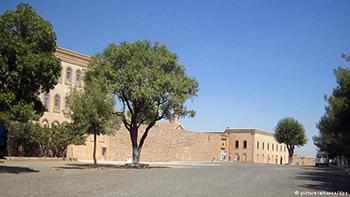 “Mass confiscations” by Turkey of churches belonging to Arameans of biblical origin have been decried by Berlin’s Protestant bishop. Markus Dröge says “cultural destruction” is taking place in southeastern Turkey.

Bishop Markus Dröge called on the international community on Monday to lodge protests over powers of confiscation decreed recently to Turkey’s religious authority Diyanet.
“Deliberately intended acts of cultural destruction,” were taking place, said Bishop Dröge, who also chairs the German Protestant churches’ Middle East Commission (EMOK).
His call follows a warning last week by EU parliamentarian Renate Sommer of Chancellor Angela Merkel’s CDU conservatives that the “nationalization of thousands-year-old early Christian heritage is absolutey unprecedented” in Turkey’s southeast.
Ankara’s repression of Arameans was making a mockery of its bid to become a member of the European Union, Sommer added.
50 churches targeted
Last week, the Federation of Christian Arameans in Germany said the southeastern Mardin regional government had confirmed to the Turkish newspaper Agos the appropriation of 50 church properties by Diyanet – Turkey’s government-supported religious authority.
The federation’s chairman Daniyel Demir said the situation remained “very complex and impenetrable,” adding that the transfers to Diyanet were “only the tip of the iceberg.”
Remaining minority Arameans, including those at the historic monastery Mor Gabriel, were trying to find out what properties among their hundreds around Tur Abdin – a mountainous part of the Mardin area bordering Syria – were picked for confiscation, said Demir.
The newspaper Agos said the wave of intended seizures involved churches, monasteries, cemeteries and farming properties.
Aramaic, the language spoken by Jesus of Nazareth, has its origins in “old testament” regions that now include northern Syria extending north.
Arameans ‘massively hindered’
Bishop Dröge, who leads one million Protestant Christians in the region Berlin-Brandenburg-Oberlausitz, said Diyanet must not be allowed to auction off thousands-year-old heritage to third persons and turn them into museums or mosques.
The few thousands of Arameans still living in Turkey were being “massively hindered” from trying to preserve or construct churches and organize training of student priests, Dröge alleged.
Escape from conflict in 1990s
The German Catholic KNA news agency said only 2,000 Arameans remained in the Mardin region, and 20,000 in Turkey as a whole, mainly around Istanbul.
Many Arameans fled their traditional settlements in southeastern Turkey in the 1990s as fighting ensued between Kurkish PKK rebels and the Turkish military.
An estimated 350,000 Arameans live in the EU – in Germany alone there are 150,000.
Court cases pending
Their chairman in Germany, Daniyel Demir, said Aramean Christians were “determined” to take their cases before the European Court of Human Rights.
It was even unclear whether Christians in southeast Turkey would have to apply for approvals, when they wanted to hold church services, Demir added.
ipj/se (AFP, KNA, epd)