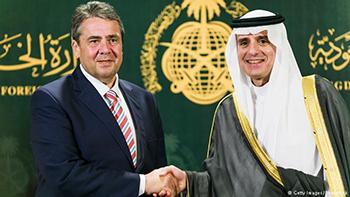 German Foreign Minister Sigmar Gabriel says he sees the issue of terrorism sponsorship as key to the Qatar crisis. He also called on the Gulf Cooperation Council, of which Qatar is a member, to remain united.
Visiting Saudi Arabia, Germany’s top diplomat Sigmar Gabriel said on Monday that an agreement to prevent terrorism financing in the Gulf region would be the best way of solving a crisis that has seen Qatar shunned by four Arab states.

Speaking at a press conference with his Saudi counterpart, Adel al-Jubeir, in Jeddah, Gabriel added that he did not have the impression that Qatar’s sovereignty was being called into question by its Gulf neighbors.
He also praised the Gulf Cooperation Council, to which Qatar belongs along with all Arab states of the Persian Gulf except Iraq, as a stabilizing force in the region and called on it to remain unified.
‘Damaging Qatari policies’
Al-Jubeir said that Saudi Arabia and Germany were in agreement about stopping the financing of terrorism. He added that Riyadh and its allies hoped for a “postive” response from Doha to a list of demands they had made “so that we can arrive at a solution to the crisis,” saying the measures aimed at changing Qatari policies that were damaging to the region and the world.
Saudi Arabia, which has accused Qatar of financing terrorism, has in the past also faced charges that Saudi donors were doing the same.
Gulf diplomatic row: Qatar faces Arab ultimatum
Before setting off on his trip to the region, Gabriel had said he intended to remain neutral in the dispute with Qatar, but stressed that stability in the region was also a matter of international interest.
Calling for “serious dialogue” to resolve the crisis, Gabriel said, “We are worried that the distrust and the disunity could weaken all the parties concerned as well as the entire peninsula.”
Gabriel flew on to the United Arab Emirates later on Monday, and was to visit Qatar and then Kuwait on Tuesday.
Heavy boycott
Gabriel’s trip comes as Saudi Arabia, along with the United Arab Emirates, Bahrain and Egypt, have boycotted Qatar over what they say is its support for Islamist extremism and close ties to Iran, seen by Gulf states as a dangerous regional rival.
Riyadh and its supporters have already severed air, sea and ground links with Qatar, cutting off vital routes for imports including food.
The four states have called on Doha to stop its support for the Muslim Brotherhood, shut down the Qatar-based broadcaster Al-Jazeera, reduce its diplomatic dealings with Iran and close a Turkish military base located in the emirate, along with other demands.
Demands ‘made to be rejected’
Qatar on Monday handed its official response to the demands to mediator Kuwait, hours after the four nations agreed to extend a 10-day deadline that elapsed on Sunday evening for another 48 hours.
The nature of the response has not been reported, but the Qatari foreign minister, Sheikh Mohammed bin Abdulrahman Al-Thani, said earlier that the list of 13 demands was “made to be rejected.” He added, however, that Qatar was ready to discuss any grievances.
Qatar has long tended to pursue a foreign policy that is more independent than that of many of its neighbors, who often follow the lead of Saudi Arabia.
Saudi king to be absent from Hamburg G20
Gabriel’s arrival also coincided with the announcement by Germany’s government that Saudi King Salman had cancelled his attendance of this week’s G20 summit in the northern German city of Hamburg.
The 81-year-old Saudi monarch was to have joined the meeting on Friday and Saturday, but will now be represented by Finance Minister Mohammed al-Jadaan, according to German news agency DPA.
tj/se (Reuters, dpa, AFP)