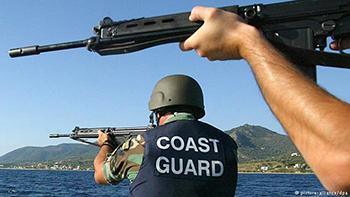 Greece’s coast guard has fired “warning shots” at a Turkish freight ship near Rhodes island, prompting a protest from Ankara. Greek police say they acted on an anonymous call that it was “transporting drugs.”
Turkey’s foreign ministry condemned Greece on Monday over the shooting that left no one injured – but 16 bullet holes in the freighter’s hull, according to its captain.
The vessel, the M/V ACT, had left the southern Turkish port of Iskenderun, near the Syrian border, and was heading west to the Gulf of Izmit when, according to Greek coast guards, it entered Greek waters northeast of Rhodes island.

“Warning shots were fired but the ship did not change course,” said the Greek coast guard.
The freighter’s captain Haluk Sami Kalkavan told Turkish media that he refused the Greek order to dock for inspection at the port of Rhodes, which lies about 15 miles (24 kilometers) from the Turkish coast.
Turkey’s state-run Anadolu media outlet said two Turkish coast boats and a navy assault boat were sent and the freighter was accompanied back into Turkish waters.
There had been no risk of water intake from the bullet holes, the captain added.
The Turkish foreign ministry described the freighter as a commercial, unarmed ship and said the shooting incident was unjustified.
Lingering tensions
NATO allies Greece and Turkey have a series of unresolved territorial disputes, including maritime disputes and long-running tensions over the divided island of Cyprus.
DW recommends
The neighbours came close to war in 1996 over islets known as Imia in Greek and Kardak in Turkish.
Rhodes was the venue last September of an international conference on security and stability involving European and Arabic representatives.
Turkish military officers escaped to Greece after last year’s failed coup in Turkey, further straining ties.
Bosphorus Strait incident
In April, a Russian naval spy ship, the Liman, sank in Black Sea waters near the entrance to the busy Bosphorus Strait after being hit in fog by a Togo-flagged livestock freighter.
All 78 crew members on board the Liman were subsequently rescued.
At the time, Turkish Prime Minister Binali Yildirim described the sinking as an accident.
ipj/se (AFP, Reuters, AP)