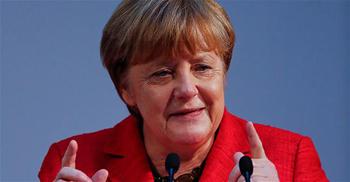 The country’s economic resilience may have contributed to its political resilience.
Krishnadev Calamur- The Atlantic

Last year’s Brexit vote followed by the election of Donald Trump resulted in the idea that populism was sweeping the West. Elections were scheduled in 2017 for Austria, the Netherlands, France, and Germany, leading to fears among the establishment in those countries that the center-left-center-right consensus that had dominated politics for much of the past half century was in peril.
The results so far have brought relief to the establishment in those countries. And in Germany, which votes in the fall, Chancellor Angela Merkel looks set to be re-elected to a fourth term in office. But just last year, that didn’t seem likely. Europe was in the midst of its worst refugee crisis since World War II and Merkel, who opened Germany’s doors to Syrian refugees, was heavily criticized by the German public for the impact the newcomers were having on society, including on law and order. Seven months later, Merkel’s main political opposition is trailing in polls and the far-right party that at one point looked threatening appears to have peaked.
Peter Wittig, the German ambassador to Washington, explained last week at the Aspen Ideas Festival, which is co-hosted by The Aspen Institute and The Atlantic, why Germany has remained resilient in the face of populism “fed [and] nourished by grievances; social, economic grievances and cultural identity grievances.”
‘A Strong Social Tissue’
Wittig credited Germany’s economy for the country’s ability to keep populism at bay.
“We have an extremely good economic run: record low unemployment, record low youth unemployment, … pretty good social-security system, less people that feel left behind, less losers of globalization, not a dramatic inequality,” Wittig said. “So there’s a strong social tissue and that has helped us.”
Indeed, the unemployment rate in Germany stands at 3.9 percent, which economists consider close to full employment. Youth unemployment stands at 6.7 percent, the lowest in the European Union, whose members have struggled economically since the global economic crisis of 2008 and the Eurozone crisis that followed it.
Ed Luce, the chief U.S. commentator at the Financial Times, speaking at the same Aspen panel, said Germany was lone among the world’s rich countries to pay attention to its middle class, which he said had been disrupted by globalization and the impact of technology. He said Germany’s resistance to populism wasn’t mere coincidence.
“Unlike us, in the English-speaking democracies, they do not confuse having skills with having a college degree,” Luce said.
Lack of Anti-EU Sentiment
Unlike other members of the bloc, where the bureaucrats in Brussels and the EU are shorthand for inefficiency and all that ails the region, Germans remain remarkably pro-European, Witting said.
“So nationalism is checked and there’s no scapegoat,” Wittig said. “We have benefited from Europe. We don’t have this anti-Brussels discourse.”
That’s the sort of discourse that resulted in the U.K.’s vote to leave the EU last June. In Germany, nearly 70 percent of the public favors EU membership, the highest number among the bloc’s founders. It’s worth pointing out that perceptions of the EU have improved across all its members states since the Brexit vote—even in the U.K., where Euro-skepticism has been a hallmark of British life for years.
The Past
The stigma of Germany’s Nazi past still looms over present-day politics, Wittig said, and the rise of far-right parties have been checked by the nation’s wartime actions.
“There is a legacy of the past: right-wing thinking, right-wing discourse, authoritarian temptations are stigmatized by the Nazi past,” Wittig. “That’s important. They exist. … But there’s a lid on this.”
Indeed, amid last year’s refugee crisis, the Alternative for Germany (AfD), an anti-immigrant populist party, began to surge in the polls, fueled by, in Wittig’s words, “cultural-identity grievances.” Although the group is expected to win seats in the German parliament in the fall—the first time since World War II that a far-right party would make it to the chamber—the AfD’s support has fallen since it first emerged on the scene. But its presence is a reminder that even the countries best prepared to tackle the rise of populist parties cannot declare victory.