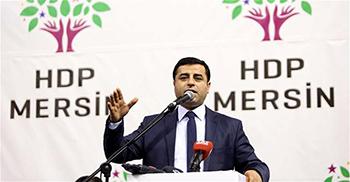 The jailed co-chair of the Peoples’ Democratic Party (HDP) has said a march launched by the main opposition Republican People’s Party (CHP) should “unify all opposition groups.”

HDP co-chair Selahattin Demirtaş, who has been under arrest in a jail in the northwestern province of Edirne since Nov. 4, 2016, said the CHP’s “justice march” must aim to provide justice for all groups, according to HDP Group Deputy Chairman Ahmet Yıldırım who visited Demirtaş in prison.

“He said the issue is not about walking to Edirne, but the march should aim to unify all opposition groups,” Yıldırım told news website Duvar on July 3.

The CHP, under the leadership of Kemal Kılıçdaroğlu, launched its “justice march” on June 15 after Istanbul deputy Enis Berberoğlu was sentenced to 25 years in prison on June 14 on charges of providing daily Cumhuriyet with video footage showing weapons-loaded National Intelligence Agency (MİT) trucks heading to Syria.

Before the march, Kılıçdaroğlu said it would continue from Ankara to Maltepe Prison in Istanbul, where Berberoğlu is currently held.

A debate then emerged on whether the march should be extended to Edirne Prison, where Demirtaş is being held, after the HDP drew attention to the fact that 11 of its lawmakers, including Demirtaş and its former co-chair Figen Yüksekdağ, are currently in jail.

However, no changes have been made to the march’s initial program.

During the visit, Demirtaş told Yıldırım that the issue of the march should be “the need for justice,” rather than any specific case.

“Demirtaş said the issue is the ‘need for justice’ rather than the fact that he himself is arrested and treated unjustly. Because of this he said he gives importance to the march providing justice for everyone practically, and not of a sort,” Yıldırım said.

The jailed HDP co-chair also stressed the “significance of making social opposition sustainable, moving beyond ambiguous discourses,” according to Yıldırım.

The HDP has opted to join the march with a small delegation so far as a show of support.

The party’s co-chair Serpil Kemalbay, lawmakers Ertuğrul Kürkçü, Feleknas Uca and Mithat Sancar, and the ousted co-mayor of the southeastern province of Mardin, Ahmet Türk, are among those planning to join the march.

The group is also set to make a press statement in front of Kandıra Prison, where Yüksekdağ is currently held.