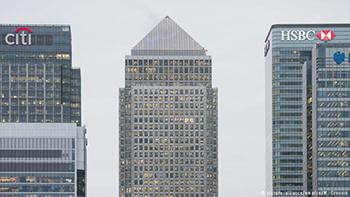 London’s banking chiefs will travel to Brussels this week to shore up the UK capital’s financial services sector post-Brexit. Several banks are planning to move staff to Frankfurt and Dublin to satisfy EU finance rules.
A delegation led by Britain’s former minister for the City of London Mark Hoban will meet European Union diplomats this week to discuss the financial district’s future after the UK exits the EU, the Financial Times reported on Monday.

The paper said Hoban would deliver a secret blueprint for a post-Brexit free-trade deal on financial services, amid concerns that one of the major drivers of the UK economy may be severely weakened by the country’s impending divorce.
The Associated Press later reported that the talks would take place on Wednesday.
London is currently ranked the number one financial center in the world by the Global Financial Centers Index, beating New York, Hong Kong, Singapore and Tokyo.
London’s status vulnerable
But fears that the British government is preparing for a so-called “hard Brexit,” where Britain leaves the EU’s single market and customs union, could see London lose its attractiveness as an investment hub. Already several large banks are planning to move staff to other EU financial centers including Frankfurt and Paris.
Hoban, who now works as a consultant, has spent months working on the blueprint, the FT said, amid concerns that London’s financial services industry may lose its edge over other financial centers. The loss of so-called passporting rights, which allows London-based institutions to offer services to clients in the 27 remaining EU states (EU27) under looser British regulations, has helped the UK capital maintain its dominance.
As Britain has just two years to negotiate its divorce and future relationship with the rest of Europe, there are worries that the deadline could be reached before the full terms of a deal can be agreed to retain easy access to EU markets.
EU mulls budget reform ahead of Brexit
Mutual access
Hoban’s plan would give financial groups from the UK and EU27 “mutual access” to operate in each other’s markets without barriers, the paper reported.
The FT said the talks between the City of London delegation and EU envoys would take place independently of the British government’s negotiations. The paper cited three officials close to the project as saying that some government officials had given unofficial support for the arrangement.
The talks come despite the EU insisting it would not discuss Britain’s future relationship until citizens’ rights and the estimated 100 billion euro divorce bill were finalized.
British Prime Minister Theresa May has also stressed that the UK negotiating delegation should not be undermined in their attempts to get the best possible future deal.
Government too narrow
The FT said the City’s own blueprint revealed how worried finance chiefs are that the British government is too focused on narrow issues related to Brexit.
Highlighting the vulnerable position London finds itself in post-Brexit, the paper reported that the UK financial center provides three-quarters of EU hedging activities and foreign exchange, and half of the bloc’s lending and securities transactions. Other EU financial hubs, including Frankfurt, are eager to swipe a major share of these services from London.
DW recommends