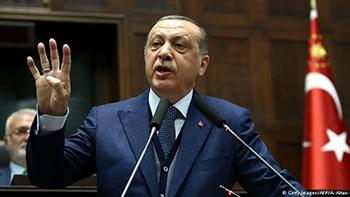 Berlin lawmakers have sought to quash rumors Erdogan still plans to host a rally on German soil during the G20 summit. Such a rally could be used to stoke support for a prospective vote to reintroduce the death penalty.

Underlining just how sour relations between Germany and Turkey had become, a German foreign ministry official warned Turkish President Recep Tayyip Erdogan on Monday against even appearing at a Turkish consulate or speaking via web video link, when he arrives in Germany later this week for the G20 summit.
Last week, the German government denied a request from Ankara to allow Erdogan to address Germany’s Turkish community.
Responding to suspected rumors that the Turkish president would defy the German government, Martin Schaefer said that doing so “would be an affront to the clearly expressed will of the government and a violation of German sovereignty.”
Schaefer said that, while he couldn’t impose an outright on Erdogan speaking at a Turkish consulate, the government had options for influencing such actions.
Germany restricts political campaigns by foreign officials
Berlin’s rejection came onthe back a new law introduced last week that bans non-EU leaders from campaigning on German soil within three months of polls in their country. Foreign officials will also need to file a request with the German government to hold any kind of political event in the country.
The new law was introduced after a handful of Turkish politicians campaigned in Germany ahead of a referendum vote in April expanding Erdogan’s powers. Turkish residents in Germany were allowed to take part in the vote.
However, a number of local German authorities blocked Turkish lawmakers from speaking, citing security concerns. The move left Erdogan infuriated by what he described as “Nazi era tactics.”
The Turkish president is currently pushing a referendum to reintroduce the death penalty in Turkey. In this instance, Germany has said that its residents will not be allowed to participate in the controversial vote. The European Union has also warned that any such referendum would effectively end its bid to join the bloc.
Unveiling their manifesto ahead of September’s federal election, German Chancellor Angela Merkel’s Christian Democrats, along with their Bavarian sister party, said on Monday that they rejected full Turkish membership to the EU.
Turkey bemoans speaking ban
Ankara decried the German government’s decision to reject Erdogan’s speaking request on Monday. The President’s spokesman accused Berlin of using “hostility towards Erdogan as way of making political gains” ahead of September’s federal election.
Spokesman Ibrahim Kalin said that even if the President wasn’t able to see his compatriots this week, “we will always be with them, in another place, at a different time and through some other means.
Turkey’s Deputy Prime Minister Numan Kurtulmus, also accused Germany of trying to sour tensions between the two countries. “Unfortuantely, some German lawmakers use animosity towards Turkey and especially animosity towards Erdogan for their own internal politics.
Berlin and Ankara have clashed on a number of other issues in the past year, including the detention of a German-Turkish journalist and the decision to refuse German delegates from visiting Bundeswehr troops stationed at a Turkish airbase.
dm/bw (Reuters, dpa, AFP)