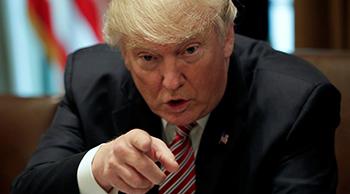 US President Donald Trump has taken to Twitter, wondering if North Korean leader Kim Jong-un really doesn’t have anything better to do than launching missiles. The statement came following Pyongyang’s latest medium-range ballistic missile test.
“North Korea has just launched another missile. Does this guy have anything better to do with his life? Hard to believe that South Korea and Japan will put up with this much longer,” the US leader wrote on his Twitter.

Trump also said that Seoul and Tokyo’s patience is wearing thin after dozens of such North Korean tests.
In his second tweet, he once again urged China to exert more pressure on the North.
“Perhaps China will put a heavy move on North Korea and end this nonsense once and for all!” Trump said.
The series of two tweets came just after North Korea carried out another ballistic missile test on Tuesday morning. According to North Korean state TV, the ICBM covered some 933 kilometers in 39 minutes, reaching an altitude of 2,803 kilometers.
The US military tracked the projectile right from the launch and determined that it was a single, land-based, intermediate range ballistic missile, which fell into the Sea of Japan after covering more than 930 kilometers in 37 minutes. The missile did not pose a threat to North America, according to the US military.
After meeting with South Korean President Moon Jae-in on Friday, Trump stated that “the era of strategic patience with the North Korean regime has failed,” adding that Washington, Seoul, and Tokyo are working together to deter the North Korean “menace.”
Prior to that meeting, National Security Adviser Herbert Raymond McMaster said on Wednesday that previous approaches to the North Korean ‘threat’ have failed. He also said that the president had ordered US officials to “prepare a range of options,” including a military one, “which nobody wants to take.”