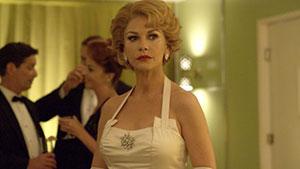 Oscar-winning actress Olivia de Havilland filed a lawsuit against FX Networks on Friday, saying she did not give her permission to be portrayed in the miniseries Feud: Bette and Joan and that her depiction in the show had harmed her reputation.

Lawyers for de Havilland, whose 101st birthday is on Saturday, said the network and Ryan Murphy Productions did not consult with her and that she is the only living person to be depicted in the eight-part miniseries.
De Havilland was portrayed by Catherine Zeta-Jones in Feud, which starred Jessica Lange as Joan Crawford and Susan Sarandon as Bette Davis.
The series explored the complex tension and bad blood between the two Hollywood screen legends in the later years of their life, especially during their filming on 1962’s What Ever Happened to Baby Jane.
Critics warmly received the series, touting it as a strong contender for next month’s Emmy nominations.
In the complaint, lawyers criticised Zeta-Jones’ depiction of de Havilland giving an interview that they said had never taken place in real life, even though the series intended for viewers to believe it was true.
In an April interview with The Hollywood Reporter, Murphy said he did not contact de Havilland because he “didn’t want to be disrespectful and ask her, “Did this happen? Did that happen? What was your take on that?”
The complaint adds that de Havilland was portrayed as a “petty gossip” in the show, which her lawyers argued was damaging to her “professional reputation for integrity, honesty, generosity, self-sacrifice and dignity.”
The complaint requests a jury trial to determine damages that include emotional distress and economic losses as well as profits made by defendants using de Havilland’s likeness.
De Havilland, best known for the 1939 film Gone With the Wind, won two Oscars in a career spanning 50 movies that was also marked by a legendary feud with younger sister and fellow Oscar-winner Joan Fontaine that was worthy of a screenplay. Fontaine died in 2013.
After a career spanning 80 years, “to say that Olivia de Havilland is beloved and respected by her peers is an understatement,” reads the court filing.
The complaint notes de Havilland “used remarkable restraint” when speaking publicly about her late, famous sister, with whom she had a decades-long feuding relationship. Yet in the FX show “Zeta-Jones’ de Havilland refers to Joan Fontaine as her ‘bitch sister,’ an offensive term that stands in stark contrast with Olivia de Havilland’s reputation for good manners, class and kindness,” writes attorney Suzelle Smith.
The complaint continues that the Gone with the Wind star also historically “refused” to dish on her famous friends while speaking with the press – likely why Feud’s opening scene struck a litigious chord.
Zeta-Jones, as de Havilland, is seen hypocritically spilling gossip about Bette Davis (with whom she starred in four films) and Joan Crawford to promote herself during an interview.
“(A)ll statements made by Zeta-Jones as Olivia de Havilland in this fake interview are completely false, some inherently so; others false because they were never said,” writes Smith. “FX defendants did not engage in protected First Amendment speech in putting false words into the mouth of Olivia de Havilland in a fake interview that did not occur and would not have occurred.”
De Havilland moved to Paris in the 1950s, where she currently resides, and has only made rare public appearances since retiring.
De Havilland’s complaint was filed in Los Angeles Superior Court. Representative for Murphy and FX Networks, a unit of Twenty-First Century Fox Inc did not immediately respond to Reuters’ requests for comment.
She is suing for infringement of common law right of publicity, invasion of privacy and unjust enrichment. She is asking the court damages and any profits gained from the use of her likeness, plus an injunction to keep FX from continuing to use her name and likeness.
Reuters, with USA Today