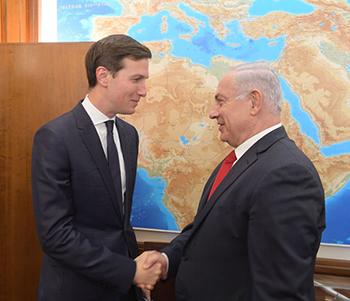 After years of trying to play neutral arbiter, the U.S. is now firmly behind Israel.
by Zev Chafets
Since the Six-Day War 50 years ago, American presidents and their envoys have tried, with varying degrees of obsession, to broker a final peace deal between Israel and the Palestinian Arabs.
They are a collective zero-for-eight.
Coming into office, President Donald Trump thought he might do better. So he recently dispatched his son-in-law, Jared Kushner; his consigliere, Jason Greenblatt; and his ambassador to Israel, David Friedman to find out.

They held two meetings. The first was with Israeli Prime Minister Benjamin Netanyahu. Netanyahu and Kushner embraced in an awkward display of fondness — they have been friends for years — while Greenblatt and Friedman looked on, kvelling like uncles at a bar mitzvah.
The Americans asked Netanyahu what it would take to make a peace deal. He responded with a list of short-term conditions: stop giving cash subsidies to the families of convicted terrorists and using official media to incite hatred of Israel. Undoubtedly, they discussed longer-term issues: the Palestinians recognizing Israel as the state of the Jewish people with Jerusalem as its indivisible capital, agreeing to Israeli settlement in designated areas of the West Bank, and expecting no more than a demilitarized state.
Kushner and Greenblatt took these conditions to Ramallah, the West Bank capital of the Palestinian Authority. Friedman was absent, having been declared persona non grata by President Mahmoud Abbas. The Israeli press attributed this to the ambassador’s financial and moral support of Beit El, a settlement located 10 minutes by car from Abbas’s office. Palestinians explained the ban by noting their longstanding policy of avoiding all American ambassadors and dealing only with the U.S. consul in East Jerusalem.
Either way, Kushner let it be known that he did not appreciate the snub.
From that rocky start, the meeting went downhill. When Kushner presented the Israeli positions, he encountered anger and dismay. The Palestinian leader adamantly denied that he was allowing incitement and refused to cut subsidies to the families of men the Palestinian public considers martyrs and heroes. One assumes he also demanded a freeze on Israeli settlements in the West Bank.
Certainly, Abbas had a right to be disconcerted. He has grown accustomed to American administrations that accept State Department gospel: The Palestinian issue is the key to Middle Eastern stability and an Israeli withdrawal from territory captured in the Six-Day War is the only solution. Abbas is also used to dealing with a certain kind of American envoy.
For many years, through the administrations of Bill Clinton, George W. Bush and Barack Obama, diplomats such as Dennis Ross, Martin Indyk, Aaron David Miller and James Steinberg were at the center or America’s Israeli-Palestinian policy making and implementation. They were a talented group, politically liberal, academically outstanding, obsessively intent on making peace — and Jewish.
Early on, this was a concern for Palestinian officials. In the Middle East, people stick up for their own tribe. Ross and Indyk had ties to the American Israel Public Affairs Committee, the Israel lobby in Washington. Indyk spoke Hebrew (although not as well as many of his Palestinian interlocutors, who learned the language during long prison sentences in Israel). Miller, although not orthodox, once halted negotiations to recite his daily prayers.
Yet for the Palestinians, the American Jewish peace negotiators proved to be a pleasant surprise. They were friendly, polite and receptive. Some Palestinians regarded this as a trick. But eventually Abbas (and before him, Yasser Arafat), concluded that there was an advantage to dealing with diplomats who went to great lengths to display their objectivity.
In Kushner and Greenblatt, Abbas encountered a new kind of American Jewish envoy. They (and the absent Ambassador Friedman) are religious Zionists, sympathetic to the ideology of Netanyahu’s Likud Party, and unburdened by the need to demonstrate neutrality. They feel that previous diplomats wasted years of their lives making incremental steps along a path to nowhere, and they had no intention of making the same mistake.
Even more importantly, Kushner and Greenblatt came to Ramallah as freelance scouts for a president untethered to State Department pieties and obsolete views of the Middle East. The question they had was simple: Is there a deal to be made?
Clear thinking from leading voices in business, economics, politics, foreign affairs, culture, and more.
The minutes of that meeting are unpublished, but clearly there was no “When Jared Met Mahmoud” moment in Ramallah. A State Department spokeswoman helpfully conceded that “some meetings are more difficult than others.” Following the meeting, a “senior Palestinian official” complained that the envoys sounded like Netanyahu’s advisers, not fair minded arbiters. This was a veiled way of accusing Kushner and Greenblatt of dual loyalty. But when applied to the president’s son-in-law or his consigliere, that trick doesn’t work.
The envoys returned to Washington and shared their impressions with Trump. I doubt he was surprised or dismayed. Despite his hyperbolic pledge to work for “the ultimate deal” in the Holy Land, the president is stuck with problems far more pressing than altering the status quo west of the Jordan River.
As for Kushner, at 36 he is perhaps young enough to someday witness a peace treaty between Israel and Palestinian Arabs. I hope so. Anything is possible. But as he learned in Jerusalem and Ramallah, it just isn’t possible now.