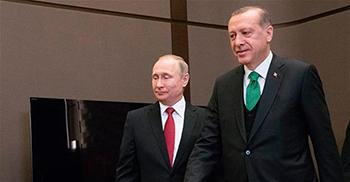 Representatives from three guarantor countries – Turkey, Russia and Iran – will come together in Astana on July 4 and 5 in a bid to conclude works to establish “de-escalation zones” inside Syria and to detail peace monitoring mechanisms in the war-torn country.

Along with diplomats and military personnel from the guarantor countries, the U.N.’s special envoy on Syria, Staffan de Minstura, Jordanian Foreign Ministry advisor Nawaf Uasfi Tel and U.S. Acting Assistant Secretary of State for Near Eastern Affairs Stuart Jones will also attend the meeting. The Syrian regime and a number of opposition groups will also be represented in the Kazakh capital.

“Meticulous work continues. We expect documents on de-escalation zones – and there will be several of them, a whole package – to be signed,” Mikhail Bogdanov, Russian deputy foreign minister and special envoy for the Middle East told reporters, according to Russian news agencies.

The agreement cites the establishment four different de-conflict zones where monitoring troops from Turkey, Russia, Iran and Jordan will be stationed. It prohibits military activities within these zones and secures the flow of humanitarian assistance to people in need.

The details of the agreement were addressed by the Turkish and Russian leaders in recent days, with Russian Defense Minister Sergei Shoigu paying a snap visit to Istanbul over the weekend to hold talks with President Recep Tayyip Erdoğan.

Presidential spokesperson İbrahim Kalın confirmed on July 3 that talks between Erdoğan and Shoigu were focused on the upcoming Astana meeting and that the Russian defense minister came upon the request of Russian President Vladimir Putin, who spoke with Erdoğan on the phone on June 30.

“All the details of the Astana process, which is being run in parallel to U.N.-led Geneva process, have been discussed. We are exerting all the efforts to make Astana process a success. We are making all possible contributions,” Kalın told reporters at a press conference, adding that a technical delegation composed of diplomats, military and intelligence organization has already been dispatched to Astana.

“We will have an intensified effort to accomplish this process, to realize a political transition and to convey humanitarian assistance. After technical meetings in Astana, it’s a big possibility that our president will meet with Mr. Putin on July 8 on the margins of the G20 Summit in Hamburg,” he said.

The Astana process was established by Russia and Turkey in early 2017 after the two countries secured the evacuation of Aleppo and provided a truce between the Syrian regime and the opposition groups. The region’s other major power, Iran, later joined the group.

Meanwhile, on questions about whether Turkey would stage a military intervention into the Afrin region of northern Syria to eliminate the presence of the Syrian Kurdish People’s Protection Units (YPG), which Ankara considers a terror organization linked organically with the outlawed Kurdistan Workers’ Party (PKK), Kalın said Turkey reserved “all the right to protect its citizens and borders.”

“Turkey will take any measure [for its security]. It will not seek anybody’s consent because it is part of our sovereign rights,” he said, vowing that the country will retaliate in kind to any threat posed by the YPG or any other terror group.

“Any measures necessary, including military planning, for the protection of our borders will continue to be taken,” he added.