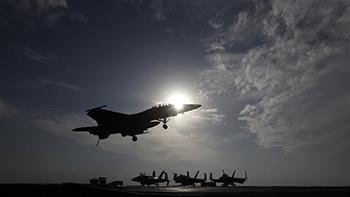 At least nine civilians have lost their lives when the US-led coalition purportedly fighting Daesh terrorists carried out airstrikes on Syria’s northeastern province of Hasakah.
Lebanon’s al-Ahed news website reported on Tuesday that the US-led airstrikes hit Kashkash Zayanat village, near the Shaddadah town in the southern countryside of Hasakah City.

According to the report, the raids caused damage to the residential areas there.
The US-led coalition has been conducting airstrikes against what it says are Daesh targets inside Syria since September 2014 without any authorization from the Damascus government or a United Nations mandate.
The military alliance has repeatedly been accused of targeting and killing civilians. It has also been largely incapable of fulfilling its declared aim of destroying Daesh.
The so-called Syrian Observatory for Human Rights said last month that 472 civilians had been killed in the period between May 23 and June 23, describing the figure as the highest civilian death toll in US airstrikes since they began in September 2014.
In May, Syria wrote to the UN, harshly condemning the US-led coalition’s fatal strikes against civilians as illegal and a breach of its sovereignty.
Russia, which is involved in an anti-terror mission in the Arab country, also said later that month the Washington-led raid “have been exacerbating the situation” in Syria and said such attacks “have nothing to do with the fight against terrorism.”