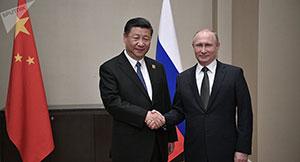 On Monday, Chinese President Xi Jinping arrived in Moscow for an official two-day visit at the invitation of Russian leader Vladimir Putin. Official talks between the two leaders are scheduled for Tuesday.

This visit is Xi’s sixth trip to Russia during his presidency, and the planned talks will be his 21st meeting with Putin.
According to the Chinese Foreign Ministry, the presidents will have a thorough exchange of views on bilateral issues, important international and regional issues, as well as issues of mutual interest.
“[I expect a] comprehensive exchange of views with President Putin aimed at deepening bilateral ties and promotion of multifaceted cooperation, as well as the actual issues of international and regional agenda of mutual interest,” Xi commented on his expectations of the visit.
Alexander Gabuyev, chief of Russia in the Asia-Pacific Region program at Carnegie Moscow Center, suggested that political rather than economic problems are likely to dominate the agenda of the talks.
According to the expert, currently there are a few Russian-Chinese economic projects that need to be additionally discussed.
“The point is that the ceiling of major Russia-Chinese deals has been reached. There are some contracts that will be signed, of course. First of all, it is a deal between Russia’s gold-producing company Polyus and China’s Fosun Group. Possibly, there will be a deal to open a new credit line for Vnesheconombank. But these deals were announced long ago, and now they will be signed in presence of Putin and Xi,” Gabuyev said in an interview with Sputnik China.

On Monday, Kremlin aide Yury Ushakov said that 40 bilateral documents will be signed during the visit of the Chinese leader to Moscow.
The expert pointed out that the majority of those documents are memorandums.
“The implementation of major projects has reached its peak. The projects that could be implemented were done in the last three years. As for the rest, it is very difficult to agree on their price and terms,” Gabuyev said.
At the same time, according to the expert, Russia-China trade has recently been growing, as a result of an increase in commodity prices and volumes.
“According to the most optimistic estimates, trade between Russia and China is expected to reach $90 billion by end of 2017,” he said.
As for politics, there are a series of issues that need to be discussed, first of all the North Korean nuclear and missile problem, he added.

During an informal meeting on Monday, the two leaders already discuss the crisis on the Korean Peninsula and agreed to cooperate on the issue.
Putin and Xi agreed to strengthen strategic partnership at the meeting in order to secure peaceful settlement of the Korean crisis through the dialogue and negotiations, the Xinhua news agency reported.
“Currently, experts cannot predict how the situation could develop and what Moscow and Beijing could do to defuse the tensions. Russia has come up with a plan which is similar to that proposed by China. Apparently, both sides have a common vision of the situation,” Gabuyev said.
Meanwhile, on Tuesday it was reported that North Korea launched a ballistic missile that fell into the Japanese exclusive economic zone.
The situation on the Korean peninsula has deteriorated in recent months due to a series of missile launches and nuclear tests conducted by Pyongyang, all of which are claimed to be in violation of UN Security Council resolutions.

Gabuyev underscored that Beijing has instruments to mount pressure over Pyongyang. At the same time, the United States considers Chinese efforts on the crisis insufficient.
“This is why there have been new sanctions against Chinese companies [working with North Korea]. Weapons supplies to Taiwan are also being discussed. Of course, the North Korean problem will be one of the key points of the talks between Putin and Xi,” the expert said.
As for the rest of the agenda, differences between Moscow and Beijing are unlikely, Gabuyev added.
“For example, both Russia and China are parties to the Paris agreement on climate change, and they will comply with the deal. But no breakthrough decisions are expected at the talks,” he concluded.