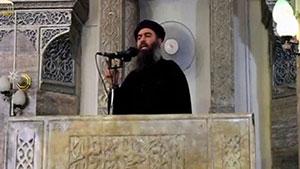 By Hassan Hassan- Tahrir Institute for Middle East Policy
Three years ago, video emerged of the leader of so-called Islamic State (IS), Abu Bakr al-Baghdadi, commanding allegiance in a sermon at the Great Mosque of al-Nuri in Mosul. The Iraqi city had been freshly captured by the jihadist group and a “caliphate” declared.

At the time, IS controlled a region the size of the United Kingdom – but since then a global war against the jihadists has sent them into retreat, and the whereabouts of Baghdadi – a man with a $25m US bounty on his head – are a mystery.
On the third anniversary of Baghdadi’s first – and last public – public appearance, IS no longer controls most of the land it once held and its leader has been conspicuously silent since addressing followers in a recorded audio message last November, after the battle to dislodge the group from Mosul began.
Amid this silence, unconfirmed reports of Baghdadi’s death have recently surfaced. Russia’s deputy foreign minister said it was “highly likely” Baghdadi was killed in a Russian air force strike on Raqqa on 28 May, and an Iranian official asserted last week that he was “definitely dead”. However, both claims were questioned by American officials.
In a video released from Raqqa a week after the Russian report surfaced, IS members referred to “our sheikh” without mentioning Baghdadi by name, leaving a question mark over his fate. After all, the Taliban and al-Qaeda hid the death of Taliban leader Mullah Omar for two years.
For both his supporters and enemies, Baghdadi’s absence at such a critical moment is perplexing.
The answer to the question about Baghdadi’s whereabouts might be related to his claim to legitimacy as caliph, or “commander of the faithful”.
According to a contentious religious rule, a candidate can (among other criteria) claim the title if he has “ardh tamkeen”, or “land to rule”.
Today, the ardh tamkeen is shrinking. IS is all but a spent force in Mosul and is under immense pressure in Raqqa, its two de facto capitals in Iraq and Syria.
(In recognition of the defining moment in Iraq, IS blew up the al-Nuri mosque two weeks ago before security forces could seize the site).
Baghdadi might be in hiding in what could be described as IS’s “third capital”, namely the areas currently controlled by the group on the two sides of the Syrian and Iraqi borders.
IS calls this area Wilayat al-Furat, or “Euphrates Province”, which mainly comprises the Iraqi town of al-Qaim and the Syrian town of Albu Kamal.
In 2014, the rise of IS began in Wilayat al-Furat and surrounding areas. According to the group’s own accounts, in videos produced recently from Anbar province in Iraq, the militants used the region as a launchpad for its blitzkriegs in Iraq and Syria.
The region also has relatively weakly armed militias and tribes, which could hold and secure the region if and when it is recaptured.
Even in supposedly liberated areas like Rutba, a town to the south, IS has still managed to carry out frequent deadly hit-and-run attacks.
No campaign has been launched yet to liberate these remote towns. Discussions as to whether the US or the Syrian government and its allies should lead the offensive on the Syrian side of the border are still being held in Washington.
If the US conducts the campaign, questions remain as to whether rebel fighters or the Kurdish-led Syrian Democratic Forces (SDF) should lead the fight.
In Iraq, places like Tal Afar, west of Mosul, appear to be a current priority for the pro-government forces.
Hisham al-Hashimi, an adviser to the Iraqi government and an expert on Iraqi jihadist groups, suggests that Wilayat al-Furat is where al-Baghdadi is likely to be hiding.
The Iraqi government has carried out several air strikes in Albu Kamal over the past two years. Iyad al-Jamili, one of al-Baghdadi’s closest aides has been spotted in the Syrian town, according to Mr Hashimi.
A number of other close associates of the IS leader have also been seen in Albu Kamal and Mayadin, another key IS town in the Syrian province of Deir al-Zour, Mr Hashimi says.
Wilayat al-Furat is the only remaining region where IS can claim ardh tamkeen.
The campaign to clear the region might take many months to begin and much longer to conclude.
Even after these areas are liberated, IS is likely to use the desert, river valleys and border zones as hideouts and to launch attacks on urban centres.
Baghdadi, unlike other jihadist leaders, tends to speak or appear only when there is an extreme need for it – as seen with the announcement of the caliphate and the appeal to followers to stand and fight in Mosul.
The higher up the IS chain of command, the more communication with superiors becomes restricted to a small number of trusted loyalists.
Less than a handful people would therefore know Baghdadi’s whereabouts. That makes it hard for the US, which has dedicated special forces constantly on the look-out for any traces of the world’s most wanted man.
The borderlands of Syria and Iraq provide Baghdadi with relatively secure and familiar terrain, in which he can hide and circumvent attempts to capture or kill him.
They also provide him with the ability to continue to claim legitimacy as commander of the faithful.
Hassan Hassan is a senior fellow at the Tahrir Institute for Middle East Policy, Washington, and co-author of ISIS: Inside the Army of Terror. Follow him on Twitter @hxhassan