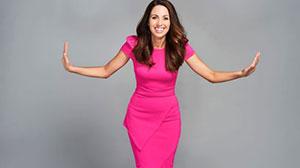 Sarah Berry
Irene Falcone is one of the 95 per cent who struggle to sleep soundly at night.