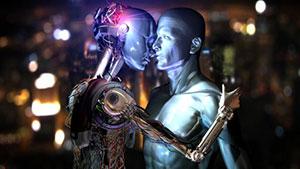 There should be a ban on the import of sex robots designed to look like children, the author of a new report into the phenomenon has said.

Prof Noel Sharkey said that society as a whole needed to consider the impact of all types of sex robots.

His Foundation for Responsible Robotics has conducted a consultation on the issue.

Only a handful of companies were currently making sex robots, said Prof Sharkey.

But, he added, the upcoming robot revolution could change that.

The report, Our sexual future with robots, was written to focus attention on an issue barely discussed at the moment, he said.

The report acknowledged that finding out how many people actually owned such robots was difficult because the companies that made them did not release the numbers.

But, said Prof Sharkey, it was time society woke up to a possible future where humans and robots had sex,

“We do need policymakers to look at it and the general public to decide what is acceptable and permissible,” he said.

“We need to think as a society what we want to do about it. I don’t know the answers – I am just asking the questions.”

Companies making sex robots include Android Love Doll, Sex Bot and True Companion. Most have previously made realistic, silicon-skinned sex dolls and are now considering or starting to ship dolls that can move and speak.

The most advanced of these is San Diego-based Abyss Creations, which ships a product known as Real Doll and is due to release a sex doll with artificial intelligence later this year. Called Harmony, the robot moves its head and eyes and speaks via a tablet-enabled app.

The company has already released the app, which allows users to programme moods and voices for an existing doll.

The report considers a few options for how such robots could be employed:

The last of these was the most problematic, said Prof Sharkey.

Sex dolls that resemble children do exist, and a court in Canada is currently determining whether owning one is illegal.

The company is on a Canadian watch list, and the doll was intercepted at the airport. Mr Harrison was charged with possessing child pornography.

In Asia, there are already brothels that use adult sex dolls. And there are reports that a doll-maker operated one in Barcelona, although this has not been verified.

Dr Kathleen Richardson, a robot ethicist at De Montfort University, agreed with the report authors that child sex robots should be banned but stopped short of calling for a ban on all such sex dolls.

“The real problem here is not the dolls but the commercial sex trade. Sex robots are just another type of pornography,” she said.

She believes such robots would inevitably “increase social isolation”.

She also criticises the report for what she said is a failure to address the issue of gender.

“Why does the report have a picture of a male robot on the cover when we know that the doll market – which is driving this – is mainly female dolls?

“It is perpetrating the idea that this is gender-neutral, but the truth is that there are not many women buying such dolls, it is largely driven by men and male ideas of sexuality.”

Prof Sharkey said that there was currently a mismatch between what those selling such dolls wanted their customers to believe about the dolls and the reality of what they offered.

“The manufacturers of sex robots want to create an experience as close to a human sexual encounter as possible,” he said.

“But robots cannot feel love, tenderness or form emotional bonds. The best that robots can do is to fake it.”

Sex robots are a relatively new phenomenon and an obvious next stage for sex dolls, which have become increasingly sophisticated in recent years. Most have silicon skin, articulated metal skeletons and realistic features such as hair and eyes.

In the main, these dolls are designed in female form, although Sinthetics has had some commercial success with its male sex dolls.

But Prof Sharkey has doubts about how human-like such dolls will become.

“I can’t see them as being like humans in the next 50 years. They will always be slightly spooky, and their conversation skills now are awful,” he said.

Dr Richardson also questioned whether such robots would become mainstream or even be possible technologically.

“The report assumes that you can create a functioning robot that can respond to humans, but in fact it is incredibly complex,” she said