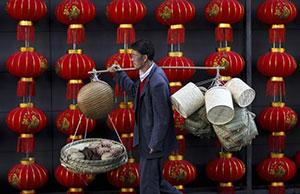 China’s services sector grew at a slower pace in June as new orders slumped, signaling renewed pressure on businesses after a pickup in May and pointing to a softening outlook for the economy, a private business survey showed on Wednesday.

The findings reinforced analyst views that the world’s second-largest economy is cooling after a strong start to the year, as Beijing cracks down on easy credit to contain a dangerous build-up in debt and defuse financial risks.

The Caixin/Markit services purchasing managers’ index (PMI) dropped to 51.6 in June from 52.8 in May, when a surprise rebound broke four straight months of declines. The June figure marks the second-lowest business activity level for service providers in over a year.

Subdued demand was behind the latest slowdown, as the new business sub-index weakened to 51.9 in June from May’s 53.5, hitting its lowest since May 2016.

Analysts remain convinced that as deleveraging efforts persist, China’s economy will take a hit. They expect quarterly economic growth to have slowed in the second quarter from 6.9 percent in January-March. The government has set a GDP growth target of around 6.5 percent for this year.

“Even though the impact of slowing expansion in China’s services sector was cushioned by a slight rebound in manufacturing activity, the downward trend in the economy remains entrenched,” said Zhengsheng Zhong, director of macroeconomic analysis at CEBM Group in an accompanying note to the data.

Profit margins also appeared to be under pressure, with services companies only able to pass on a marginal portion of their input costs to consumers, although the rate at which costs are rising slowed in June.

As a result, the rate of job creation in the services sector fell further in June to its slowest in 10 months.

China is counting on services, particularly high value-added services in finance and technology, to lessen the economy’s traditional reliance on heavy industry and investment. The sector accounts for more than half of China’s gross domestic product.

The Caixin findings contrast with an official survey last week which pointed to accelerated growth and stronger demand in services, supported by robust expansion in financial services and construction sectors.

The divergence suggests the environment facing large parts of China’s service providers who dominate sectors such as catering and accommodation are less rosy, as they have entered the most challenging funding environment in years.

A similar Caixin survey on Monday showed the manufacturing sector unexpectedly expanded in June as new orders and production rose in a sign of a modest recovery. It suggested much of China’s recent economic strength remains strongly dependent on heavy industry and continued government stimulus, benefiting mainly large state-owned firms.

Caixin’s composite manufacturing and services PMI, also released on Wednesday, fell to 51.1 in June from 51.5 in May, signaling the lowest overall growth momentum since June 2016.