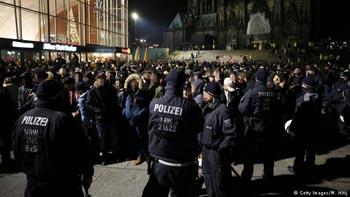 Riot police have used water cannons to disperse a large crowd of protesters rallying in Hamburg against the upcoming G20 summit.

Footage shared on social media shows dozens of police officers in full riot gear descending on the activists. Behind the police, lines of water cannons that are being used against the protesters.

In recent days, authorities have been cracking down on numerous protest camps that have mushroomed across the city. Police also seized a large assortment of homemade weapons that anti-capitalist demonstrators have allegedly planned to use to disrupt the summit.

On Tuesday evening, police cleared tents at one of the parks in the Altona district of the city, setting up a more than one kilometer road block cordon from the Walter-Möller-Park, Sueddeutsche Zeitung reports. To clear the camp, authorities reportedly used pepper spray.

Tuesday night’s discharge of water cannons happened in the Neuer Pferdemarkt area, where thousands of activists have been rallying throughout the day.

More than 100,000 people are expected to take part in dozens of various demonstrators in Hamburg on Friday and Saturday.

At least 15,000 police officers from all of Germany’s the federal states are being deployed to ensure public security at the G20 summit.

The Federal Criminal Police Office, (Bundeskriminalamt, BKA), is responsible for protecting the visiting leaders. Other specialized units, such as the SEK, MEK, GSG9, and the BFE in addition to a dedicated anti-terrorist division will provide security for the summit, Bild reports.

Demonstrators had been given until the start of the week to clear out and dismantle their protest camps around the city. Most protesters refused prompting police to move in.

In an effort to make the public understand the seriousness of the threat, police released footage showing a number of homemade weapons seized by authorities in Hamburg and surrounding areas in recent weeks.

“We can assume this is only a small fraction of what is still hidden in cellars and garages around Hamburg,” Jan Hieber, the head of the city’s CID said, according to the Telegraph. “This is not a question of sit-ins, but of major attacks.”

The “militant far-left” decided “to organize the biggest black bloc of all time,” Hamburg interior minister Andy Grote claimed Tuesday in an interview with the ZDF broadcaster.

“Protest camps are permitted, but not camps in which people stay overnight,” Grote said, as quoted by the Local.