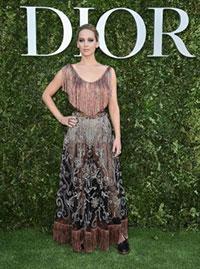 Picture your high school boyfriend. Did he have floppy, mid-centred parted hair with frosted tips and a fondness for wearing his boxer briefs bunched up over his jeans?

What other associations do you have with boxer shorts? Let’s see. The Looney Tunes ones you wore to bed in high school?

And we should not forget the edict that GQ sent out to all men of style to stop wearing boxer shorts immediately with damning message: “You say they’re masculine, unpretentious; we say they’re the uniform of your overzealous teenage-boy self.”

Well anyway, boxer shorts are having the last laugh (or maybe it’s the fashion industry?) because they are now very high-end as Jennifer Lawrence and her exposed Dior branded boxers worn to the opening of the Dior exhibition during Couture Week can attest.

In fact … they’re… rather chic?

Lawrence, who is an ambassador for the luxury French fashion house, wore a sheer floral applique skirt over the afore-mentioned boxer shorts, a shimmering tassel top and, in a footwear choice that should have been bewildering but somehow isn’t, combat boots.

The whole look screams subverted femininity, and tough yet “delicate when you get closer”, and fancy ath-leisure. It’s a lot, but it worked.

And that is mainly down to those boxers. They make an outfit deliberate and bold; they both toughen and soften (because showing your knickers is both brave and vulnerable).

It’s a look that has been gaining traction for some time.

Girl of the moment Bella Hadid has previously been snapped in the Dior branded smalls (which also include a branded bra-strap meant to be exposed – a genius move by relatively new Dior artistic director, Maria Grazia Chiuri). And she wore them again to the same event as J-Law, albeit in a more muted, monochrome look.

Indeed it’s kind of been the look of the moment for the cool girl set, with Rihanna, Bella’s sister Gigi and Kendall Jenner all buying into the boxers as a deliberate accessory aesthetic.

Which, when it boils down to it, is the essence of wearing your boxers as outerwear. There’s a certain cool insouciance to it and, without that attitude, well, you may just end up looking like you’ve made an unfortunate fashion faux pas.

So if there’s a moral to this trend it’s that, if you do find yourself with boxers, knickers or bra strap on display, behave exactly as if you meant to do so. Even if you didn’t. That is how you start a trend.

And that is precisely how boxer shorts have made a comeback.