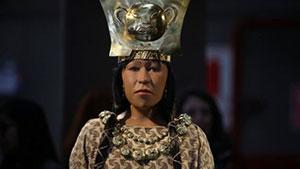 Scientists in Peru have managed to reconstruct the face of a powerful ancient female leader using 3D printing.

The woman, known as the Lady of Cao, belonged to the Moche culture in northern Peru and died 1,700 years ago.

Her preserved remains were found in 2006 at a mud-brick ruined pyramid known Huaca Cao Viejo, near Trujillo.

Scientists were able to replicate her face after analysing her skull structure and remains.

The Lady of Cao was buried with a crown, and gold and copper items.

The grave also contained a number of weapons, including two massive war clubs and 23 spear throwers.

A modern autopsy revealed she had been in her 20s when she died, probably of childbirth or pregnancy complications.

Her feet, legs and face were tattooed with magic symbols of serpents and spiders.

The richness of her burial site suggests she might have been a priestess or even a political ruler.

Prior to this discovery, it was believed that only men held high rank in the Moche culture.

Peru’s minister of Culture, Salvador del Solar, said the reconstruction had revealed an oval face with high cheekbones, which many Peruvians shared and would recognise.

“We are privileged to announce this strange combination of the future and the past: technology has allowed us to see the face of a political and religious leader from a culture from the past.”