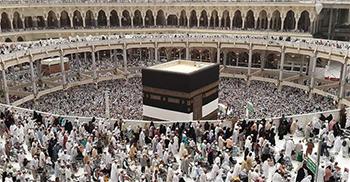 Iran will be allowed to set up temporary consulates in Saudi Arabia during the hajj pilgrimage despite the absence of diplomatic ties between the two rivals, the foreign ministry in Tehran said on July 4.

“Some officials from the foreign ministry’s consular section will be deployed to Jeddah, Mecca and Medina to provide consular services to Iranian pilgrims during the hajj,” spokesman Bahram Ghasemi was quoted as saying by the ISNA news agency.

Iranians were unable to attend the hajj last year after talks on security and logistics fell apart.

But an agreement was reached earlier this year to allow Iranians to take part in this September’s hajj.

The two countries severed diplomatic ties in January 2016 after Iranians stormed Saudi Arabia’s embassy in Tehran in response to the execution of a prominent Shiite cleric.

The region’s two leading powers back opposing sides in several conflicts, including in Syria and Yemen.

More than 1.8 million faithful took part in last year’s hajj. The pilgrimage is one of the five pillars of Islam and all Muslims who can must perform it at least once in their lives