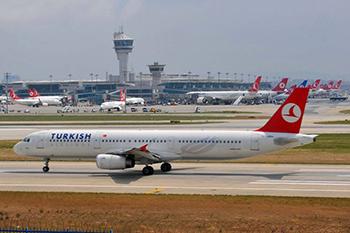 Turkish Airlines said it expects measures barring laptops from the cabins of aircraft leaving Istanbul for the U.S. to be lifted Wednesday, while rival Emirates is counting on the curbs being removed from its Dubai hub soon, and Saudi Arabian Airlines predicts it will be free of the ban in two weeks.

Turkish Air closed up 3.4 percent following the comments from Chief Executive Bilal Eksi via Twitter late Monday. Emirates said it’s “working hard” with authorities on enhanced airport safeguards required by the U.S. Department of Homeland Security to secure exemption from the measures, and Saudia indicated that it’s looking for the restrictions to be scrapped by July 19.

“We hope that we will receive validation that all measures have been successfully implemented so that the electronics ban can be lifted as soon as possible for our U.S. flights,” Emirates, the world’s biggest long-haul airline, said in an email Tuesday.

Royal Jordanian, whose Amman hub is another of the 10 airports to be affected by the curbs, said it has asked the U.S. Transportation Services Authority to approve its response to the new guidelines requiring stricter scans and checks and is awaiting a decision on the removal of the laptops ban, which also applies to large electronic devices such as tablets and games consoles.

Abu Dhabi, the home base of Etihad Airways, became the first airport to see the ban lifted Sunday, aided by a so called pre-clearance regime in which travelers are subject to U.S. border checks before boarding the plane. The termination of the restrictions at major Mideast hubs will spell relief for carriers after they led some customers to switch to airlines where they could still use devices.

U.S. restrictions on visas for citizens of six Muslim-majority countries could still mean fewer passengers on some flights, while demand in the Persian Gulf has weakened as the low price of crude holds back oil-based economies. At the same time a political dispute between Qatar and several of its Arab neighbors has forced Qatar Airways to scrap some flights and divert others.

The airport was one of 10 in the Middle East and North Africa where American authorities stopped passengers from bringing devices items larger than mobile phones onto U.S.-bound planes as of late March. President Donald Trump’s administration is pushing hubs to beef up security after intelligence reports indicated terrorist groups may be capable of hiding bombs in the items.

Emirates, the world’s biggest long-haul airline, has previously said it suffered a drop in bookings and had to ground 13 planes because of U.S. restrictions on entry visas as well as the electronic carry-ons. Dubai Airports has offer its full cooperation in working with regulatory officials and authorities, but can’t say when curbs there will be removed, according to a spokesman.