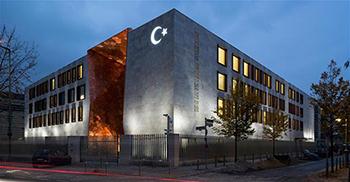 The Turkish Embassy in Berlin on July 4 sent an “urgent” diplomatic note to the German Foreign Ministry over what it described as a “provocative act” by a local artist against President Recep Tayyip Erdoğan in front of the chancellery building.
Artist Philipp Ruch had prepared a Mercedes car with a banner featuring pictures of Erdoğan, Russian President Vladimir Putin and Saudi King Salman bin Abdulaziz, featuring the words “Do you want this car? Kill dictatorship” He then placed the vehicle in front of the Chancellery in Berlin on July 3.

“It is not understandable or acceptable that such a violent act was allowed in front of the chancellery building, and under the protection of security forces. It is obvious that such acts encourage hate and violence at a sensitive time when the peace and common values of societies should be protected,” the embassy said in a statement condemning the incident.