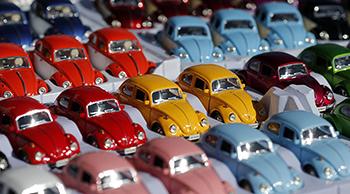 German carmaker Volkswagen (VW) said Tuesday it would resume exports to Iran as soon as next month, marking a return to the resurgent market of the Islamic Republic after a 17-year absence.

The aim is to reduce the manufacturer’s dependence on volatile markets such as China and Brazil. VW’s deliveries to China reportedly dropped 3.3 percent between January and May to 1.51 million cars while sales in Brazil fell 1.9 percent to 116,600 vehicles.

The company sealed a deal with local importer Mammut Khodro, which is due to import VW Tiguan and Passat models through eight dealerships mainly in the Tehran area.

VW is seeking to catch up with European rivals Renault and Peugeot Citroen that became the first car makers to re-enter the Iranian car market after Tehran’s 2015 deal with world powers.

Europe’s largest car manufacturing group began selling vehicles in Iran in the 1950s, but suspended exports in 2000 as the international sanctions introduced against Tehran over its nuclear weapons program began to bite.

“We are strengthening once more our international presence,” said Anders Sundt Jensen, VW’s project leader for Iran in an emailed statement, as quoted by Reuters.

The company is trying to embrace new overseas markets as it struggles with multi-billion euro losses following the diesel gate scandal. VW is currently investing into electric car projects and new mobility services.

The latest move will help the automaker to get to know local market conditions and re-establish the Volkswagen brand, according to the statement.

Annual sales in the Iranian market are seen rising to about three million cars over the medium- to longer-term, VW said, citing government estimates.