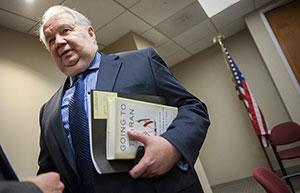 WASHINGTON, /TASS/. The domestic political strife which has overtaken the United States has seriously undercut Russian-US relations and work with the Trump administration is unfolding quite uneasily, Russian Ambassador to the US Sergei Kislyak told TASS.

The Russian ambassador expressed his opinion in an interview with TASS on the eve of the first meeting between Russian and US Presidents Vladimir Putin and Donald Trump at the G20 summit in Hamburg.

Trump has repeatedly stated that he wishes to work together with Russia in the fight against terrorism and to respond to other shared challenges. However, the opposition in the United States has taken on a hostile attitude towards his intentions and in fact the incumbent US administration has not taken any real steps in this direction so far. On the contrary, it has recently expanded the anti-Russian sanctions imposed by former US President Barack Obama over the developments in Ukraine. Meanwhile, US legislators are hashing over a package of new sanctions against Russia.

“The internal political struggle in the United States has dealt a heavy blow to Russian-US relations. Sometimes, you are surprised at the ease with which the American establishment is ready to sacrifice normalcy in our relations,” the ambassador said.

According to the envoy, this is largely due to the strong inertia of both political thinking and Washington’s realpolitik.

Asking rhetorically about whether “there is still hope,” the Russian ambassador responded in the following way: “It’s hard to count on a quick and easy way to normalization: there are too many people who want to hinder its advance. The sanctioning frenzy against our country in the US Congress only confirms that. The new sanctions are another headache.”

Nevertheless, the impending meeting between the Russian and US leaders will take place soon, the ambassador noted.

“I hope it will determine in which direction interaction between our countries will further develop,” Kislyak stated.

“There are always opportunities for positive turnarounds. What is needed is the resolve not to miss such opportunities. Let’s see what the US will do for the meeting.”