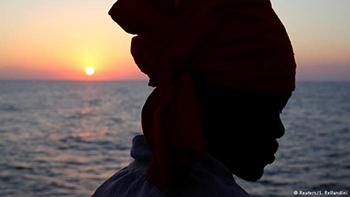 The rights body has warned that Europe’s reliance on Libya in stemming the migrant crisis puts those affected in extreme danger. Migrants risk either dying at sea or face grave rights abuses in Libya, Amnesty said.

Rights group Amnesty International on Thursday condemned the European Union’s decision to prioritize funding Libyan coasts guards in a bid to stem the influx of migrants crossing the Mediterranean Sea, rather than stepping up rescue missions.

Brussels is looking to Libya, a country besieged by violence and political crises, and providing is its coast guards and the Navy with funds, equipment and training. Its operations focus on rescuing stranded migrants and returning them to Libya, where rights abuses and extremism remain rife.

Amnesty’s scathing report, entitled “A Perfect Storm,” outlines the dire choices facing those seeking to make the hazardous journey to Europe. On the one hand, would-be migrants face risking their lives at sea or face finding themselves trapped and having their human rights abused in Libya.

Onboard a refugee rescue ship

“This reckless European strategy is not just failing to deliver the desired outcome of stopping departures and preventing further loss of life, but is in fact exposing refugees and migrants to even greater risks at sea and, when intercepted, to disembarkation back in Libya, where they face horrific conditions in detention, torture and rape,” the report said.

More than 2,000 have died attempting to cross into Europe from Libya so far this year, while around 85,000 have reached Italy, the UN’s refugee body reported this week.

Iverna McGowan, the head of Amnesty International’s European Institutions Office, warned that the worst implications of the EU’s policy may go unseen. “People who are disembarked in Libya are going back to unlawful detention centers where they are facing torture, rape and other unthinkable abuses,” she said.

McGowan also warned that the EU’s agreement to fund Libyan coast guard forces was “deeply problematic.” She accused the EU of being “unconscionable” in its decision to “allow certain rescue operations that we know are inadequate and trust that with people’s lives.”

Meanwhile, Amnesty’s René Wildangel, a Berlin-based analyst for Amnesty, warned that the EU’s decision to effectively empower Libyan forces could lead to more migrants making the dangerous journey over the Mediterranean. “With its eyes wide open, the EU could be steering itself towards one of the deadliest years on its coasts,” Wildangel said.

The report cited an incident in which two Libyan coast guard officers were involved in an attack on rescue ship run by the charity, Doctors Without Borders in August.

Amnesty also reported in May that the Libyan Coast Guard intercepted a search-and-rescue operation carried out by an NGO, where the officers reportedly threatened the migrants with weapons, seized the boat and took it back to Libya.

The Amnesty report also argued that non-governmental organizations (NGOs) and charities must continue participating in migrant rescue missions in the Mediterranean. Italy, which finds itself overwhelmed with the latest surge of migrants arriving on its shores, is looking to prohibit NGOs from bringing rescued migrants to its shores, and is even threatening to turn their ships away.

Italy has called for greater burden-sharing with its EU allies. The country has taken in around 85 percent of the 85,000, namely sub-Saharan African migrants that have arrived in Europe since the turn of the year.

The European Commission on Wednesday called on all member states to step up their efforts in helping Italy, as well as Greece, cope with the latest influx of migrants arriving in Europe.

The Commission’s vice president, Frans Timmermans, told legislators that “it would already make a world of difference in Europe if every single member state would live up to their commitments to show solidarity.”

The EU has voiced its commitment to have member states take in refugees, taking at least some of the pressure of off Italy and Greece. However, several eastern and central European countries have shown next to no appetite for such a policy.