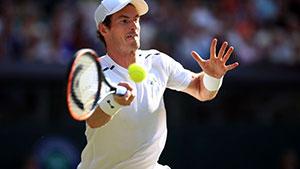 Andy Murray made light work of crowd-pleaser Dustin Brown to cap a brilliant day for British players at Wimbledon.

Andy Murray made light work of crowd-pleaser Dustin Brown to cap a brilliant day for British players at Wimbledon.

The world number one’s 6-3 6-2 6-2 victory over Brown meant success for all four home singles players on Wednesday, with Murray’s win following those of Johanna Konta, Heather Watson and Aljaz Bedene.

It is the first time in 20 years that Britain has four players into the third round of the singles, and Kyle Edmund could make that five when he takes on Gael Monfils on Thursday.

Murray has been used to providing Centre Court drama over the years but this time he followed it after Konta’s three-hour epic against Donna Vekic.

As soon as Murray won the first set it was clear the joy in this contest would be from the shot-making rather than the competitiveness.

Brown, a German-Jamaican with dreadlocks reaching down to his waist, is one of tennis’ born entertainers and the unorthodox nature of his game can cause problems for the best.

He famously beat Rafael Nadal at the same stage of Wimbledon two years ago, while Murray’s defeat to Brown’s serve-volleying compatriot Mischa Zverev at the Australian Open in January would have given him encouragement.

But Centre Court is Murray’s stage and the world number one did not allow himself to be bullied.

Tennis players love rhythm and Brown provides none, mixing 128mph second serves – his fastest serve was a second serve – with languid volleys and drop shots before throwing in a thumping backhand or two.

But Murray has some of the best hands in the game and was rarely outmanoeuvred.

He continued to limp but it was clear there should not be too much concern about his right hip as he scurried all over the court.

Brown’s serve was under pressure from the start and a double fault in the eighth game gave Murray the first break before he served out the set.

The Scot found some magic of his own in the fifth game of the second set, drawing a thumbs-up from Brown with a backhand pass threaded down the line and then applause for a lob onto the baseline.

In four of the best points seen at Wimbledon so far, Brown responded with a half-volley winner off his toes and a fine angled volley.

The problem for Brown, though, was he followed up by dumping a forehand into the net and missing a volley as Murray broke for 3-2.

The Scot was just far too consistent, and he broke again after somehow returning a Brown smash from point-blank range.

The belief had gone out of Brown’s game and he was unable to put up any real resistance in the third set.

He at least forced Murray to serve it out but that proved no problem for the top seed, who finished with a rather generous tally of 31 winners and five unforced errors.

The victory maintains the 30-year-old’s record of never having lost before the third round of Wimbledon, and he moves through to a meeting with flashy Italian Fabio Fognini on Friday.

Murray said: “I felt the momentum was with me, I was starting to see the shots he was going to play a little bit quicker and that allowed me to get to some of the drop volleys and also to come up with some good passing shots.

“I played well. The last three games I didn’t serve particularly well, but the rest of the match I served well, I was getting a lot of free points there, serving a lot bigger than I was in the first round which is good.

“He wasn’t able to attack my second serve like he tries to do, so that was positive.

“I think I moved pretty well too. Against guys that play a lot of drop shots and come forward you need to move well and I did that.”

Asked about his hip, Murray told the BBC: “It’s okay. I’ve moved well the first couple of matches. It hasn’t affected me. I’ve been getting good practices in and I feel good. Hopefully it stays that way.

“So far I’ve been very happy with how I’ve been feeling on the court. It’s been a good start and hopefully I can keep it going.”