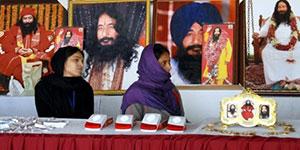 An Indian court has granted permission for the followers of a long-dead spiritual guru to preserve his body in a freezer.

But his followers insist he is only meditating deeply, and will one day return to life.

They have kept his body in a commercial freezer at his vast ashram in Punjab.

The judgement by Punjab and Haryana High Court ends a three-year-old dispute between the guru’s disciples and Dalip Kumar Jha, who claims to be his son.

Mr Jha had sought permission to cremate the guru’s body, in line with Hindu rituals.

In rejecting his plea, the court set aside a 2014 judgement that had ordered the guru’s cremation after doctors confirmed him clinically dead.

Mr Jha’s lawyer told AFP it was unclear whether the court had agreed with the sect’s argument that its founder was alive.

Mr Maharaj first established his sect in Jalandhar, Punjab, in 1983, to promote “self-awakening and global peace”.

Over years, it attracted millions of followers across the world and amassed properties worth an estimated $120m (£92m) in India, the US, South America, Australia, the Middle East, and Europe.

The heavily-guarded 100-acre ashram in Punjab where the guru has been kept is just one sign of his vast financial assets.

Mr Jha has accused the guru’s disciples of retaining his body as a ploy to keep control of his wealth.

Shortly after his death in 2014, the guru’s spokesman Swami Vishalanand told the BBC: “He is not dead. Medical science does not understand things like yogic science. We will wait and watch. We are confident that he will come back.”