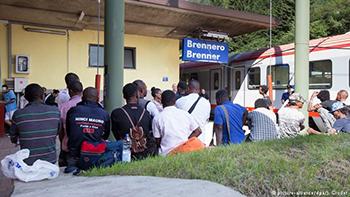 Vienna has scrambled to dampen a row with neighboring Italy. Defense Minister Hans Peter Doskozil had told media he was ready to send some 750 troops to the Brenner Pass to “protect” Austria from any migrant influx.

Austrian Chancellor Christian Kern on Wednesday played down a recentrow with Italy over border controls, dismissing the entire incident as a “misunderstanding.”

“One must clear up misunderstandings like the ones that have evidently arisen with Italy,” Kern said during a joint press conference with Austria’s defense minister, Peter Doskozil.

It was Doskozil’s comments in an Austrian tabloid on Monday that sparked the row with Rome. Speaking on Monday to “Krone”, Austria’s top-sailing tabloid, the defense minister said that Austria was ready to deploy 750 troops and four armored vehicles at the Brenner Pass on the border with Italy within 72 hours to stem any potential influx of migrants.

How welcome are refugees today?

While the passage is part of the route used many migrants travelling through Europe, it is also a key gateway for Italy to reach its trading partners.

The comments also implied that Italy had lost control of the over the inflow of migrants, mostly sub-Saharan Africans, arriving on its southern flank.

The United Nations’ migration agency this week estimated that number to have topped 100,000 since the turn of year. Italy has taken in nearly 85 percent of new arrivals and is pleading for more help from its European Union allies.

Kern played down any rift between the two countries, stressing “that cooperation with Italy is really good.” The prime minister also said that, despite the rising number of new arrivals crossing the border into Italy, there had been no noticeable increase in migrants crossing the Brenner into Austria.

However, in a joint statement also released on Wednesday, Kern and Doskozil also made clear that Austria was preparing “for a possible worsening of the situation (in Italy)” and would indeed introduce controls at the border if there were a surge of migrants there. “One thing is clear: there cannot be a repeat of the situation like the one in 2015,” the statement said.

The migrant crisis in Europe in 2015 saw Austria take in more than 1 percent of its population of namely Middle Eastern asylum seekers, who had crossed into Europe through Greece and travelled over the Balkan route.

That lifted support for Austria’s far-right, anti-immigration Freedom Party (FPÖ), which has only continued to rally in the polls since. With a parliamentary election scheduled for October, the FPÖ is projected to poll well in August and potentially even emerge as the most popular party.