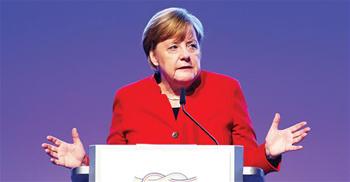 There are very few political leaders who have perfected the art of having their political cake and eating it too. German Chancellor Angela Merkel is one of these.

Internationally, she is renowned as the leader of Europe who seemingly single-handedly rehabilitated Germany’s international reputation by welcoming refugees with the catchphrase “we can do it”. With electoral pressure building, however, she publicly distanced herself from this stance as the CDU/CSU party faithful sent back the message that they were not so sure.

Now, by accepting their demand for a Bundestag vote, she has outflanked Martin Schulz’s Social Democrats by securing the passage of marriage equality as one of her government’s achievements, despite openly voting against it herself. The issue has been effectively neutralised.

Before marriage equality had arisen as an issue, Merkel had also done the same with immigration and the hot-button issue of asylum seekers. As one report put it, Merkel’s “summer of welcome” that saw asylum seekers march across Europe to reach the safe-haven of Germany has been followed by a long winter of conservative base-pleasing changes to the country’s political asylum laws. These have made it much tougher to successfully claim refugee status and much easier for unsuccessful asylum seekers to be deported to countries such as Afghanistan.

Pushed by circumstances to the centre, Merkel’s CDU/CSU coalition has now steered back to the right on refugees. Given her 2010 statement that multiculturalism has “utterly failed”, this seems to be where she would prefer it to stay.

Merkel, who has been German chancellor for a remarkable 12 years, is facing an election in September. Electorally, her right-ward shift on migration has largely defused the threat from Germany’s rabidly anti-immigration, far-right “Alternative for Germany” (AfD) party, which has also been hit hard by internal divisions.

While still gaining some traction in local and state elections, the AfD‘s “Merkel must go” demonstrators are looking increasingly unsavoury to German voters.

The marriage equality vote is another textbook example of how Merkel has been able to defuse highly controversial issues before an election. With the promise of same-sex marriage looming as a real point of difference between Merkel’s conservatives and her junior coalition partners, the centre-left SPD, Merkel swiftly brought on a conscience vote in the Bundestag that freed culturally liberal conservatives to vote for the measure and thus ensure its passage.

In a matter of days, the issue of marriage equality had been raised, voted on, and dealt with. The SPD has done its best to paint this as their victory. But, the plaudits have largely fallen to Merkel.

Notwithstanding recent rumblings that conservative Bavaria might challenge the decision in the Federal Constitutional Court, this was all done without a protracted or acrimonious public debate on the legislation. Nor did it require a divisive referendum or plebiscite, or further harden divisions in her conservative coalition.

In keeping with her role as a self-conscious dampener of debate, Merkel took no part in the Bundestag discussion on marriage equality held before the vote. Instead, she merely took her red “no” voting card to the front of the assembly and, holding it so as not to obscure it, cast it.

When called on by the press to explain her vote, Merkel again avoided emotive discussion or the appearance of deeply felt conviction. She said simply that the measure did not, to her mind, conform to Article Six of Germany’s constitutional protection of marriage.

Effectively, her argument was that, in a conscience vote, she was guided not by her conscience, but by her interpretation of law. To this rather clinical argument she added only that she hoped the resolution of the issue would foster both mutual respect and “a bit of social peace”.

This last remark offers an insight into Merkel’s understanding of the chancellorship. By refusing to be distracted by narrow culture wars in defence of totemic conservative issues, Merkel has in fact presided over a coalition government that is strongly conservative in substance, but careful to avoid the impression of being anything other than pragmatic.

Domestically, Merkel has stuck to the so-called “schwarze Null” (budget in the black) policy, despite worries about ageing state infrastructure. Externally, she has stubbornly held to the conservative policy of defending German interests against the pleas of Greece and other struggling European countries for more generous forms of economic assistance.

Yet such criticisms of her policy direction have failed to gain widespread traction. On the contrary, in the flamboyant age of Donald Trump and Britain’s Brexiteers, her unassuming but tenacious leadership style has appealed to many, both inside and outside of Germany, as reassuringly level-headed.

A federal election is just two months away, and Merkel has tried to clear the decks. With tough new asylum laws, the threat of a migration election has receded. And with the passage of marriage equality legislation, the possibility of the vote becoming a de facto referendum on gay marriage has been averted.

With recent polls placing the CDU vote at 40%, and the SPD languishing on 23% (with the AfD slumping to 7%), Merkel is looking comfortable. Barring the unforeseen, Merkel seems likely to win her fourth election victory looking like a centrist, in coalition with social democrats, but governing as a conservative.

Sanna Marin: The feminist PM who says trans people have a ‘right to self-identify’