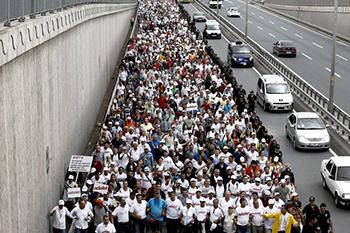 After walking for hours in the rain with the swarm of protesters trekking west toward Istanbul, Turkey’s main opposition leader Kemal Kilicdaroglu swapped his wet sneakers for a pair of sandals to give his feet a rest.

It had been 20 days since he ventured from Ankara on foot with hundreds of others to resist President Recep Tayyip Erdogan’s far-reaching crackdown on dissent. Along the way, the march has grown to about 30,000 protesters, waving banners that say “adalet” or “justice” and blocking two lanes on the highway connecting Turkey’s biggest cities.

“We have a dictator reigning over us,” Kilicdaroglu said while taking a break in a caravan parked near the town of Derince, about 75 kilometers (47 miles) east of Istanbul. “The goal of this march is to revive a democracy that’s losing blood and a sense of justice that’s been destroyed.”

Despite being tired from walking about 20 kilometers a day in mostly scorching heat, Kilicdaroglu’s enthusiasm was palpable. Before now, his Republican People’s Party, or CHP, had avoided endorsing participation in mass protests, including the Gezi Park demonstrations four years ago that first gave the world a glimpse into the anti-government sentiment brewing in Turkey.

But the mild-mannered 69-year-old politician realized traditional forms of resistance were futile after Erdogan narrowly won a referendum in April to vastly expand his powers over government, parliament and the judiciary. Fraud allegations tarnished the vote, leaving the 48.6 percent of Turks who cast ballots against the constitutional overhaul doubting the result, but helpless to do anything about it.

By organizing the 450-kilometer march, Kilicdaroglu has given them a platform to forge a united front against Erdogan’s power grab. He’s been careful to avoid branding the demonstration as a CHP endeavor, compelling hundreds of artists, journalists, academics and Kurdish politicians to brave a record summer heat wave and tag along.

“There was a broad mass that voted ‘no’ in the last referendum. One of the goals of the march is to grow that number,” he said.

The tipping point that sparked the unprecedented act of mass defiance was the arrest of CHP member of parliament Enis Berberoglu, who was sentenced last month to 25 years in jail for allegedly leaking images to the press showing Turkey’s intelligence agency was shipping weapons to Syria. He’s being held at the Maltepe prison in Istanbul — where Kilicdaroglu aims to hold a rally to mark the end of the march on July 9.

Berberoglu is one of the 50,000 people Erdogan has thrown in jail since he imposed a state of emergency after facing down a coup attempt in the early hours of July 15 last year, including leading journalists, academics and the heads of the pro-Kurdish party known as HDP. More than 100,000 Turks have lost their jobs in the purge.

The route of the march took protesters through many of the small Anatolian towns where Erdogan has a stronghold. Some marchers worried that moving to a presidential system undermines the independence of the judiciary, particularly since Erdogan gets to hand pick almost half of the top judges. Others had loved ones in jail or were concerned about how their own freedom of expression is being curtailed.

“The fact that the main opposition is taking to the streets demanding justice alone shows how serious the situation has become,” said Ferhat Tunc, 51, a folk singer who said he’s being investigated for insulting the president in speeches and concerts. “I’ve been through the 1980 coup, and today it’s much worse than that.”

Erdogan’s lawyers are opening court cases against people accused of insulting him at a pace of more than 10 per day, justice ministry data show. Turkey is the world’s largest jailer of journalists, according to Reporters Without Borders.

Even within the ranks of the ruling AK Party, opposition to Erdogan’s vast consolidation of power is growing and defections are likely, said Atilla Yesilada, an economist at GlobalSource Partners in Istanbul. He regards Kilicdaroglu’s march as an effort to build a “non-partisan coalition to reject the presidential system.”

While the justice march is bringing together Erdogan’s opponents, it’s also revealed how polarized Turkey is. Erdogan has dismissed protesters as defenders of terrorism, and numerous counter demonstrations have popped up to show support for the president.

Winding its way through Derince, a town of about 125,000, the rally was received enthusiastically by residents leaning out of windows to clap and cheer and truck drivers honking their horns, but also faced angry insults from groups of mostly young men flashing nationalist and Islamist hand signs. At one point, police had to intervene to stop half a dozen men from attacking the marchers.

“The chief of justice is here,” 40-year-old Tayfun Cekin said from the sidewalk where he watched the protesters walk by, while tapping the glass of a framed portrait of Erdogan in his hands.

The protesters couldn’t disagree more. They decry Erdogan’s move to sack more than 2,000 judges since last summer. Turkey ranked among the worst 15 countries on rule of law in an index published last year by the World Justice Project, trailing Iran and Russia.

“This society won’t accept it,” said demonstrator Mehmet Tum, an opposition lawmaker from the city of Bandirma. “However dictators in the world were brought down before, that’s what we’ll do.”

The closer the march gets to Istanbul, a chaotic metropolis of 15 million, the greater the risk of confrontation, especially if it swells to the hundreds of thousands as some in the rally predict it might. Coinciding with the arrival, Erdogan is planning anniversary celebrations to mark the year since the botched coup.

Kilicdaroglu, for his part, is keen to keep things peaceful.

“Everyone who thinks they’ve been a victim of injustice supports this,” he said. “Of course there have been those who protest, but our only reaction is to clap or to call out our slogan: ‘Rights, Law, Justice.”’